Something Different: A Royal Portable in Chrome and Woodgrain

Today I have something pretty special to share with the Typosphere.  I've scoured the Interweb high and low with nary a trace to be found of this color scheme.  I've seen silver plated Coronas in a couple of places.  There is also the nearly mythical gold plated Royal of Ian Fleming fame.  I am aware of chromed Olivers designed for tropical duty.  The Typosphere is also populated with fine examples of aluminum body typewriters stripped and polished.

And I finally found a close cousin of this Royal Portable!  I should have checked Robert Messenger's Museum blog first given his vast and beautiful array of typewriters.   His machine appears to be a second generation Portable dressed head to toe in shiny chrome.  Gorgeous!
http://oztypewriter.blogspot.com/2011/03/prince-in-shining-armour-right-regal.html

Before I get carried away, I invite any of you possessing a chrome and  wood grain Royal to step forward lest I totally embarrass myself.  I think this is a fairly unique machine.  Even if it is not, there will now be a digital record with plenty of photos.


This Royal Portable came to me by way of ebay a couple of months ago.  I finally got around to cleaning it on a freak warm January day.  The seller was located in New Jersey and I was unable to get a back story on the machine.  It wasn't dirt cheap, but it cost just a smidge more than the average black machine of the era.  I was the only bidder.
According to the Typewriter Serial Number Database, my Royal was manufactured in 1929.  Based on the overwhelming and toxic mold/mildew smell, it would appear that much of its life was spent in a basement.
Under normal circumstances, I would not bathe a rare machine.  In this case I had no choice.  The chrome shell smelled toxic even after removing it for hand washing.  So into the sink the chassis went with a mixture of ionic and non-ionic surfactants.  I was reluctant to take this step after having a mixed outcome with the sans serif Everest K2.

I kept the keys above water for the immersion bath (2 wash + 2 rinse cycles).  The prior owner of long ago was rightly proud and appears to have displayed it prominently in a house full of cats.  Even after dry brushing, the wash water was beyond disgusting with fur, dirt, old oil and pencil and eraser shavings.

The one advantage to basement storage is that the rubber rollers are still flexible.  Excess humidity is good for something!

The case, I am reasonably sure, is beyond salvaging and will need to be burned.  It is in great condition, but the smell...oh, my!  Perhaps a friendly key chopper will have an extra case I can pick up on Etsy or Ebay.

Since I am unable to find evidence of the existence of similar Royal Portables, this one is something of a mystery to me.  We love the color combination (or lack thereof)!  Having grown up in the 70s in the back of a family Ford station wagon with peeling wood grain flapping in the wind, I am not normally a fan of that particular look.  However, the paint work is well done and quite durable as evidenced by my washing experience.

Hooray!  The scanner is no longer on strike, so here is the type sample. 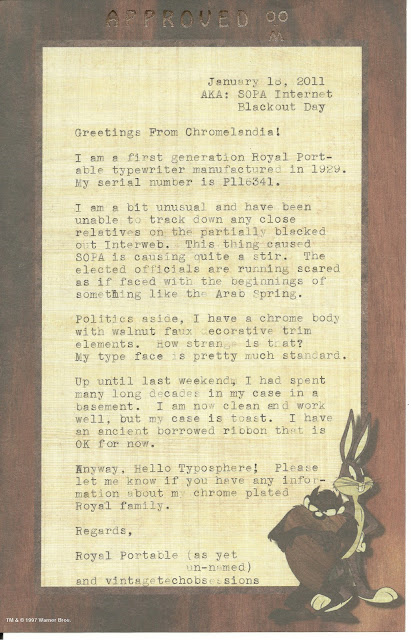 This machine types pretty well but it is loud and not well suited to late night typing.  The key feel is a bit heavier than the Triumph of the same era, but it should loosen up with a bit of exercise.

I look forward to your comments and speculations.

This is the Internet calling.  You may take your SOPA back.  Thanks!

Greetings from a Happy Robot

The junk bots on this blog look vicious.

I'll admit enjoying the whole mythos of giant robots from space run amok and determined to take over our pretty, shiny planet.  But there are also heroic robots like R2-C4 that come out of nowhere to save humans from the literary slaughter.

I also have some totally happy and well adjusted junk bots I've built and similar collaborations with Claire.  She tends to save robotic destruction for cartooning and builds generally happy robots.

Unfortunately, those robots haven't been featured often enough and I need to alter the Happy Bot Quotient.

The following happy robot was built as a gift for a friend of the family's high school graduation.  She is a Harry Potter fanatic and one of the biggest Word Nerds we know outside of our own family - ironic as she is the child of an engineer and a math teacher.  She is relentlessly upbeat with a touch of snark and needed a friendly companion for the dorm. 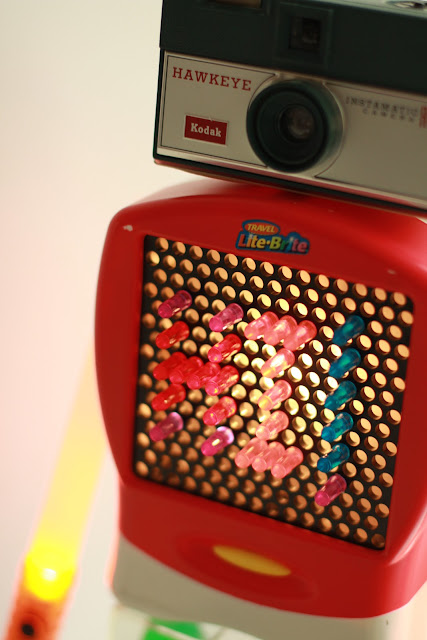 With the exception of the after Halloween clearance arms, this bot was built with parts from my favorite thrift shop.  I was so excited to find a travel Lite Brite!  I can think of few things better for Word Nerds.

This robot has a lower recycled content than many due to the light sticks.  All of the assembly hardware came from yard and estate sale garage and basement collections.  We often use LEDs and sound boards recovered from dead or unwanted toys. 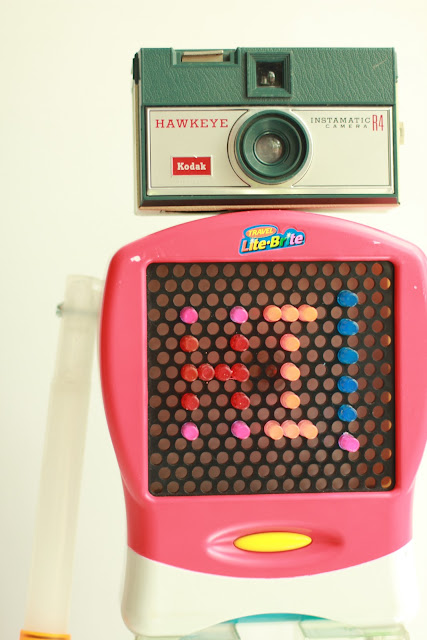 I have to admit a bit of existential angst after reading Robert Messenger's post on typewriter vandalism (more commonly known as Key Chopping in North America).  It's hard for me to know where to draw the line between junk and history when gathering parts.  Happy Meal toys are easy as there are whole tubs full that go unsold and end up in the thrift store dumpster.  My Spousal Unit would probably not be shocked to learn that I have scrounged things out of said dumpster.

Both the Lite Brite and the Kodak Hawkeye were garage sale rejects that still had their masking tape price stickers.  Still, the Hawkeye is unique.  I do save and display a variety of point and shoots from the 1930s-1970s.  So the line is fuzzy at times and subject to fits of whimsy on my part.  Generally, the higher the technology and mechanical level, the less likely I am to turn it into a robot part.


So there you have it: a happy robot with a side of angst.  This probably won't be the last happy robot to earn a spot on Vintagetechobsessions.
Posted by Dwayne F. at 12:55 AM 4 comments:

Everest K2 with a Serif Allergy 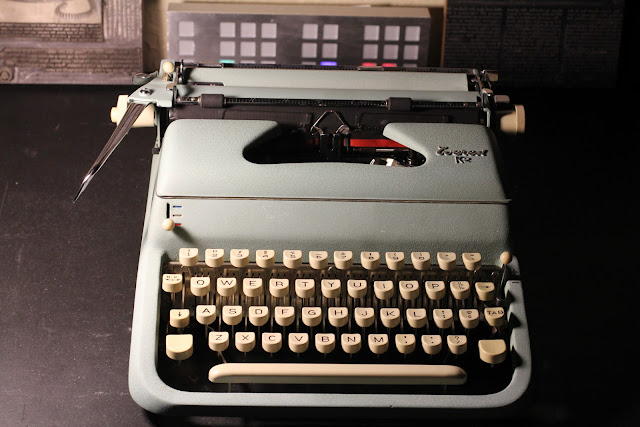 Does anyone have a controls diagram for this machine that they can scan?

I observed in the typecast that this typewriter still has a few issues.  I can't help comparing this to my German machines including the Olympia SM3s and the freakishly smooth Torpedo 18.  I had to do a lot of filing and bending to get parts to work on this machine due to alignment problems in the key bar slots.  That gave me a chance to get to know the mechanical bits well, with some problem yet to be discovered that is keeping the carriage from moving consistently.

My general opinion is that they tried hard, but there are just some basic design and finish issues that get in the way.  It isn't as slushy as the Royal Futura 800.  The cast aluminum frame is well done.  They didn't skimp on key tension springs.  With all that going for it, various alignment issues appear to have kept this machine from having been used very much.  The type slugs were already pretty clean when I got it.

Assuming I get the carriage draw tweaked, I think it will be a decent typer for short works.  The type face is really cool and joins the unique SM3 italic iterations and the Royal script in the household typing pool.  Guess I need to buy some new ribbons!

Christmas Was So Two Weeks Ago

It's interesting to me just how short the American post-Christmas attention span is.  We have this huge build up starting before Halloween (our local CVS had nutcrackers and zombie masks out at the same time), and by December 27th Christmas is just a dim memory made foggier by leftover cookies and family feast remains.

Christmas was so two weeks ago, but I am still enjoying gifts including a little something that Claire lovingly modified for my amusement.

We'll just say that no board book or mini bit of kitsch artwork is safe from her and her pens.  These particular books had moved from her closet to a donation pile over the Thanksgiving weekend.


Thus ends Christmas 2011.  As long as the Mayans were wrong, we look forward to another season of lights and nerdy fun at the end of 2012.

Really, I mean it.  Christmas is over.  We take down the decorations this weekend.  Some people have a hard time letting go, but the the next post will be something entirely different - promise!

Behold our new slate top work bench!  It should be impervious to solder, fire, many fine chemicals and Lego NXT pieces.  Metal bits can scratch slate, so we'll be careful with typewriter repairs and robot builds.

The real challenge is keeping a house full of book, crossword, pen, typewriter and electronics loving nerds from filling up this luscious horizontal space.  We will do our best and try to keep the major builds out by the drill press on the junk art bench.