On the Origins of the Christmas Squirrel - Part 1 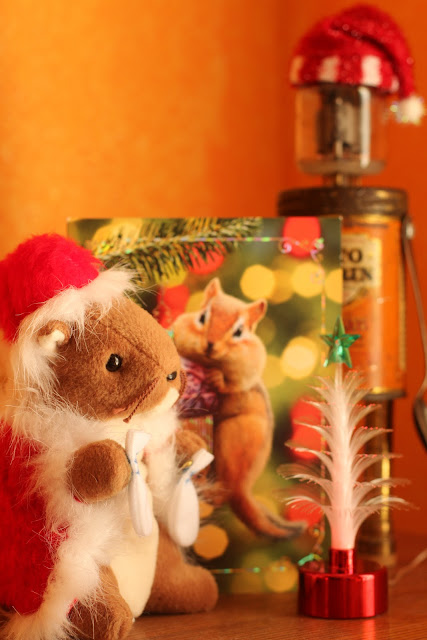 The truth, dear reader, is closer than you might think.  Do you have trees in your back yard?  Do squirrels cavort merrily about, darting to and fro as they gather food for the impending dark, cold months known as Winter?

You might be surprised to learn the true motives of your neighborhood squirrels go far beyond the mere needs of survival.  You see, the squirrel metabolism runs really fast, especially for the one squirrel who zips around the world assisting Santa.  The Christmas Squirrel needs fuel and the tribe obliges.

No one thinks to leave the Christmas Squirrel acorns and milk.  The lowly squirrel is forgotten and ignored, but carries forth on its mission cheerfully and with great aplomb.  It is a faithful servant.  Many say it is a hero that Santa cannot live without.

Where did this forgotten hero come from?  I'm glad you asked.

Part 1:  History in the Making

The Origins of the Christmas Squirrel

Once upon a time, the world was a much smaller place.  In the intervening years between various plagues, the tribes of northern Europe adopted gift giving traditions inspiring the emergence of the prototypical Father Christmas.  Their North American mutt descendents brought the old traditions with them through Ellis Island and points west.

The American Santa got to work in the 1830s.  The United States was small at roughly 7 million souls spread wide across farm and field.  The portly and jolly Santa was a surprisingly good sprinter and dispatched his yearly mission with ease.

The Industrial Revolution brought new challenges as cities grew along with the population.  Santa was no technological slouch.  He took to the skies at the turn of the last century.  The famed patented device "Flying Sleigh and Reindeer" revolutionized Christmas.

As the American population grew, so did Claus Enterprises' manufacturing and distribution system.  Santa was all about efficiency.  Still, it was one man, Santa Claus, that took it upon himself to visit every house, hovel and tenement that would have him.

Fortunately, technology stayed apace with the collaboration of Erwin Schrodinger and Nikola Tesla.  Quantum theory and practical application of phased particle transmission lead to the creation of the fabled Mass Uncertainty Holding Device - more commonly known as the Sleigh of Holding.  Although several patents were applied for, none were issued as Marconi and Edison both claimed credit for the invention.  The resulting lawsuits finally reached the Supreme Court in February of this year.


Edison, however, was right on one count:  there was a practical limit to AC electricity and its application to mobile mass conversion and storage systems.

Santa hit the technological wall in September of 1929. At 123 million American recipients and counting, the output of the mighty Claus manufacturing empire choked on the unexpectedly limited capacity of the Sleigh of Holding.

Santa tried to keep this calamity quiet.  But Edison caught wind of his misfortune and had other ideas. He set his marketing team to work on a program to discredit his old foe Tesla, and AC electricity, for once and for all.

The news broke nearly simultaneously across the country precipitating the stock market collapse of October, 1929.  As the saying goes, "What's good for Santa is good for the country." It turns out the opposite is true, as well.


The Christmas of 1929 was grim.  Santa had to chose what to leave behind.  With tens of millions of residents under-served, American optimism waned.  With each passing year, sentiment and the economic situation worsened.  If Americans could not count on Santa Claus, who could they count on?

Coming Soon! - Part 2:  The Coming of the Christmas Squirrel