This post commemorates the 9th anniversary of Opportunity landing on Mars on January 25, 2004.  It is hard to believe a machine designed for a 90 day mission could still be functional in the harsh Martian environment for this many years.  I've included some highlights culled from various NASA and JPL sources. (Updated January 23, 2013)


Here is the official press release noting the first signal from Opportunity on January 25, 2004.
http://marsrovers.jpl.nasa.gov/newsroom/pressreleases/20040125a.html
(excerpt)
NASA's second Mars Exploration Rover successfully sent signals to Earth during its bouncy landing and after it came to rest on one of the three side petals of its four-sided lander.

Mission engineers at NASA's Jet Propulsion Laboratory, Pasadena, Calif., received the first signal from Opportunity on the ground at 9:05 p.m. Pacific Standard Time Saturday via the NASA Deep Space Network, which was listening with antennas in California and Australia.

"We're on Mars, everybody!" JPL's Rob Manning, manager for development of the landing system, announced to the cheering flight team.

NASA Administrator Sean O'Keefe said at a subsequent press briefing, "This was a tremendous testament to how NASA, when really focused on an objective, can put every ounce of effort, energy, emotion and talent to an important task. This team is the best in the world, no doubt about it."


I remember reading the news that came out after the mission extension press release.  Having Spirit and Opportunity on overtime at day 90 was amazing then.  Getting one of these rovers to year nine was inconceivable at the time.

NASA Extends Rover Mission - April 8, 2004
(excerpts from press release)
"Given the rovers' tremendous success, the project submitted a proposal for extending the mission, and we have approved it," said Orlando Figueroa, Mars Exploration Program director at NASA Headquarters, Washington, D.C.

"Once Opportunity finishes its 91st sol, everything we get from the rovers after that is a bonus," said Dr. Firouz Naderi, manager of Mars exploration at NASA's Jet Propulsion Laboratory, Pasadena, Calif., where the rovers were built and are controlled. "Even though the extended mission is approved to September, and the rovers could last even longer, they also might stop in their tracks next week or next month. They are operating under extremely harsh conditions. However, while Spirit is past its 'warranty,' we look forward to continued discoveries by both rovers in the months ahead."

At the time of this writing, we are still several days away from the ninth anniversary.  Here is the eight anniversary press release.
Opportunity Eight Anniversary Press Release

JPL posted an image of the view from Opportunity on its eight anniversary.  Mars is only a little less lonely with the arrival of Curiosity. 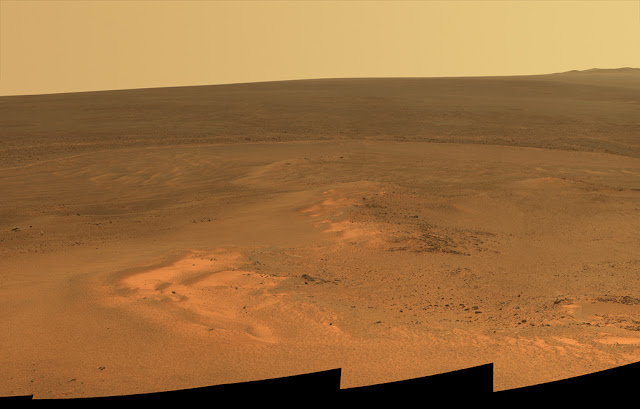 JPL continues to provide regular mission updates at http://marsrover.nasa.gov/mission/status_opportunityAll.html  As of January 10th, Opportunity is in great shape with some memory cache issues similar to problems Spirit had in its first year.  After waking up from a long Martian winter last May, it has been on the move and doing science.  Fortunately, a good windstorm helped clean off the solar panels and increase power output to around 460 watt hours.  For perspective, Opportunity is working on just enough energy required to run one toaster slot and has run on far less depending on dust buildup, season and atmospheric opacity.

Once again, here are images to compare and contrast generations of Mars rovers from the U.S.  First, here are proving ground models of each rover.  We've gone from something the size of a dog to a nuclear pile powered, laser equipped laboratory in a very short time. 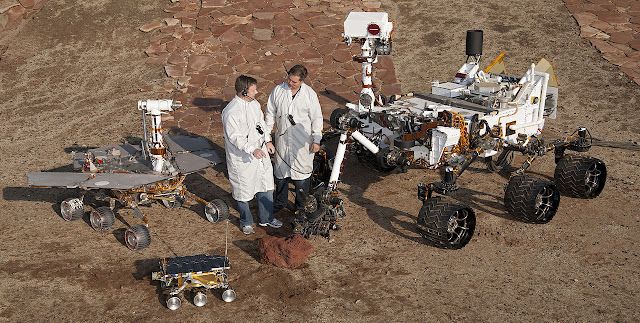 And, as a contrast, here is my favorite rendering of the Curiosity landing platform.  This is a long way from the bouncy rover approach of prior generations. 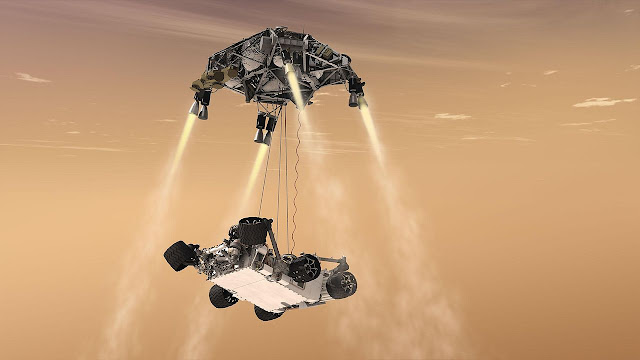 I just found a fresh rendering of another view of the landing from Caltech.  Like! 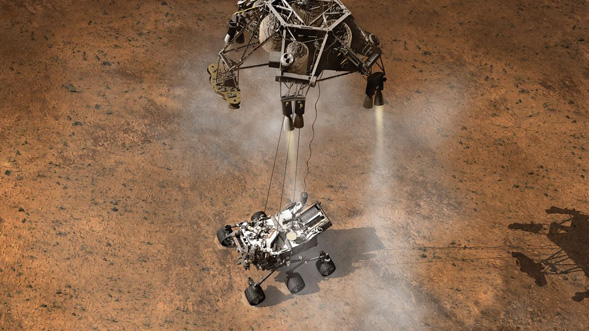 I'm wrapping up this entry the day before the 2013 Inauguration.  The NASA "Mohawk Guy" will be marching in the parade with part of the mission team and a Curiosity model.  Here is the model getting some finishing touches. 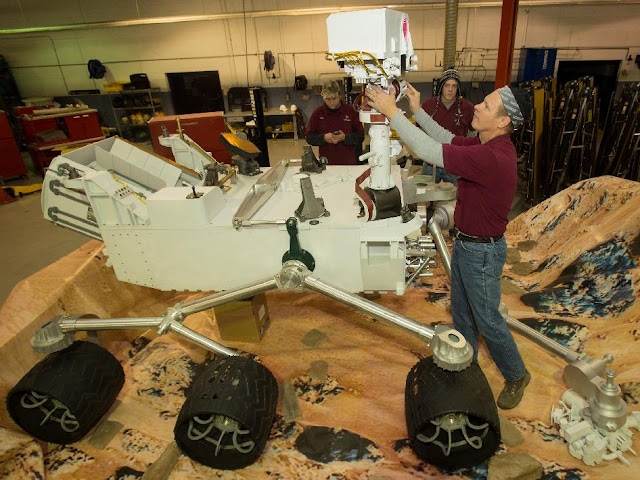 As for the Inauguration, my spousal unit, MEK of the House Full of Nerds, is in D.C. and just send some preview images of the bleachers I scored tickets for.  She is taking a friend and will get to sit right across from the White House!  I try to keep this blog as a Casablanca style politics neutral zone.  If you are interested, I posted photos from my trip to the 2009 Inauguration at
http://digitalmemoryhole.blogspot.com/2013/01/obama-inauguration-2009-redux.html

Yes, this post is supposed to be about Opportunity.  Ultimately, each rover generation is a stepping stone to the next.  I can't wait to see what our technology looks like in 2030!
Posted by Dwayne F. at 2:46 PM 1 comment: 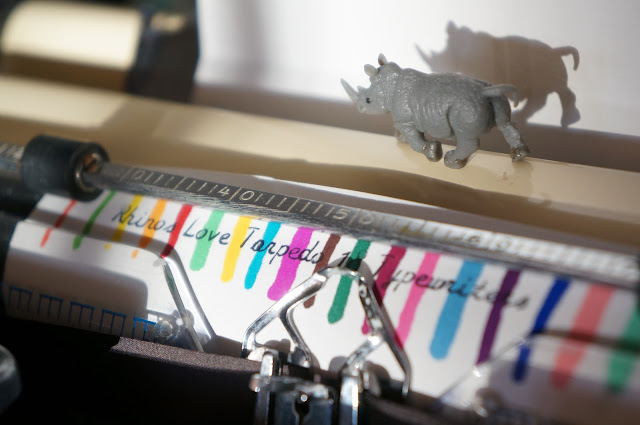 Rhinos also love rare shafts of winter morning sunlight.  But, they practically swoon over Torpedo 18 typewriters.  What isn't too love?  The action is light and snappy.  The generic European cursive typeface is very attractive.  And besides, Torpedos often come in colors that help the mighty rhino hide from potential predators. 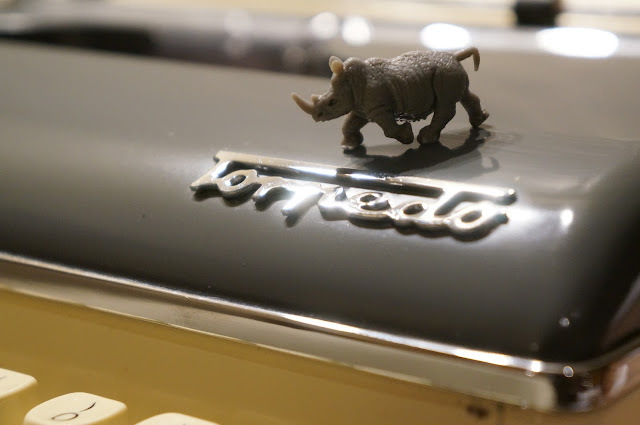 This is a curious feature of most of my cursive/script typewriters:  they come in really odd and/or boring color combinations.  The Royal Futura has an amazing typeface and is two shades of Borg grey.  Almost all Facits are Viking gray, but it is a most boring color for a script machine.  The Olympia SM-9 comes in off-white with the dark grey keys.

Could it be that script machine users were trying to keep a low profile?  Who knows. 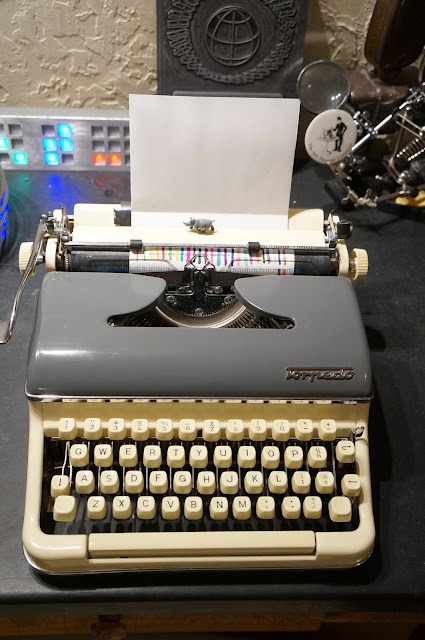 I actually considered repainting the top of this machine.  The color scheme, however, is growing on me.  It reminds me of a mid-fifties car.  Note the missing tab keys that would come with the 18B model.

This is a great correspondence typing machine.  It came by way of ebay last year.  The special paper is from a test series Claire ran on her Christmas Sharpies.  She has a routine for testing new pens and pencils.  The photos were taken with my new Sony NEX-6.  Yes, I am in love with this camera!

Happy belated New Year to everyone!

I'm a little behind due to a last minute attempt by the Mayans on my family.  I guess they were upset by the documentation of the battle to save Earth from the Destructor fleet and decided to throw us a nice dose of food poisoning.  Never fear- we all made it to 2013 more or less intact.  I was happy to come home from work yesterday and find my spousal unit up and moving around after three days of "an extremely low energy state".  That is a nice way to put it.

We'll never know what got us.  Was it the salsa or guacamole from our favorite Mexican restaurant?  The spring rolls from our favorite Asian place?  Our favorite sandwich shop?  Something lurking in our fridge?  We ate out frequently over a three day period before the buggies hit since we had a friend visiting from the east coast.  We, at least, were at home when it hit.  She was on a plane, but made it (barely) to the terminal before the full assault.

As this this was a less than inspirational message, I will leave you with a couple of cheerful images:

Number 1:  Svetlana Optima has dispatched one of her helpers to take care of the last of the Mayans hiding out in the jungle like that Japanese soldier on the island after WW-II. 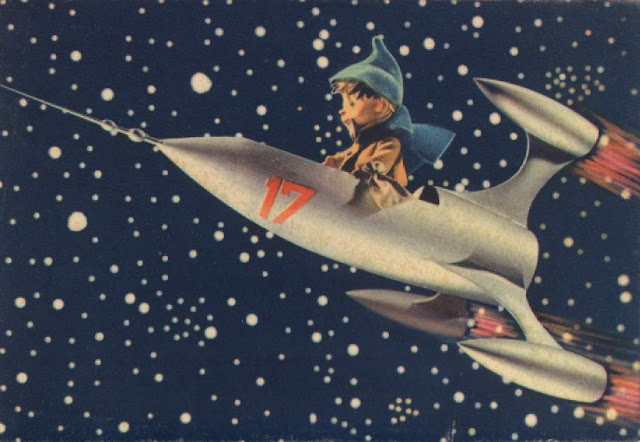 You have to admit this image is pretty awesome!  Find it you must with a collection of other Soviet Cold War era postcards at http://www.mazaika.com/postcard/aerospace0.htm


Number 2:  Matching JINHAO Dragon's Descendent fountain pens that arrived the day before we came down ill.  Sure, they are a little garish, but this is still the Year of the Dragon.  The youngest nerd in the house, Claire, is a Dragon and so am I.  Can you guess which pen she chose? 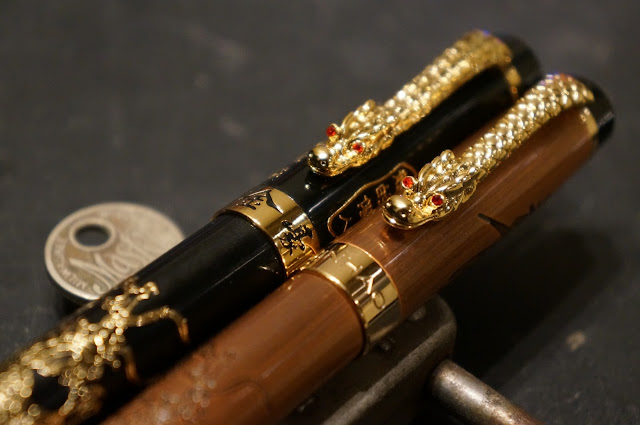 We'll post a more thorough review later.  The first impression has been positive.  These lay down a very smooth and inky line.  However, mine needed help getting started again after sitting for a few days.  This is not a problem I've had with the more expensive TWSBI Diamond 540 that starts right up after sitting for a month.  I think a tiny o-ring may be in order to seal the cap better.

Notwithstanding dry start performance, these are full of Dragony goodness... and they have beady red eyes!  What more could we want in a cheap fountain pen?

I sincerely wish a great and healthy 2013 to all and look forward to blogging merrily on the Typosphere throughout.

P.S.  The girls and I watched the first two extended Lord of the Rings movies before we were again fully functional humans.  They also received NOOKS conveniently loaded with the most current edition for Christmas.  I've been remiss in not recognizing the birthday of the true Lord of Middle Earth,  J.R.R. Tolkien.  Thanks for creating magic with the written word.
Posted by Dwayne F. at 12:07 AM 3 comments: