After a long absence, I am trying to get this blog moving along while burning vacation time on various projects around the house and spending time with my family. Perfection has been the enemy of content as of late. Imperfect photos from my phone might streamline things a bit.

Here is a find from a recent journey to a First Friday weekend warehouse antique mall. I was shocked to spot an early Oliver in the wild. I was even more surprised when it was priced reasonably enough to carry it two blocks to the car and bring it home  :-) 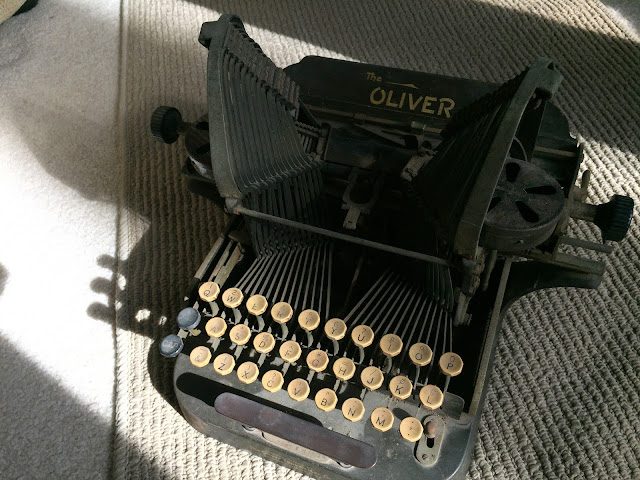 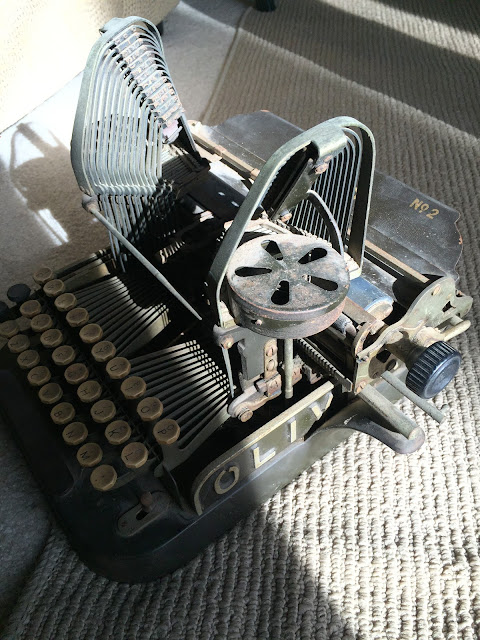 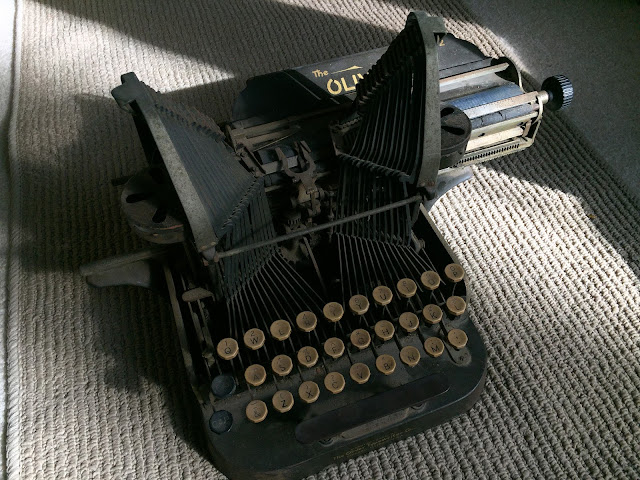 This machine is really grubby, but probably cleaner than I would be after sitting around for over a hundred years. It appears to be complete. There is a serial number somewhere under all that dirt and grime. Either way, Ted Munk's database shows an 1897-1901 production run for this model.

Time is a precious commodity and one I have been short of in a flurry of work, business travel, Senior year college visits, and various band, orchestra, theater, and cross country events. I'll keep it covered in a safe place until one of those PowerBall tickets comes up a winner  ;-)

What do Remingtons and Harleys have in common? 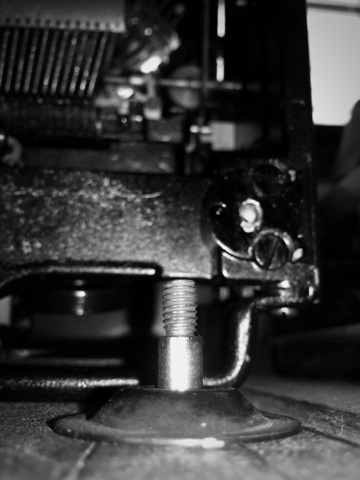 This weird beast is from a foot on the Remington Noiseless. I bought a parts machine to get various bits I wanted.
Posted by Dwayne F. at 11:37 AM 2 comments: 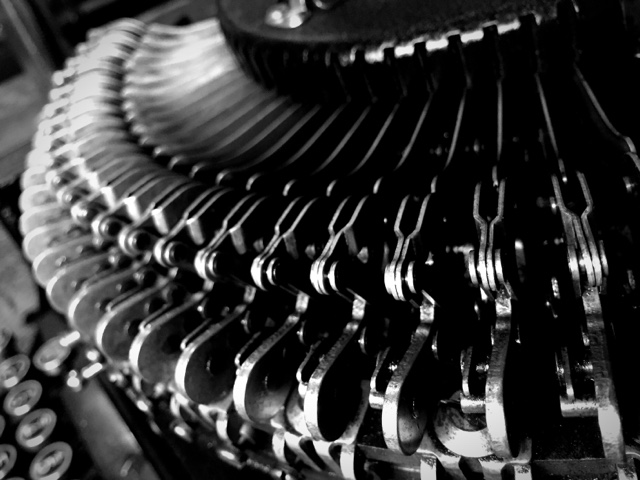 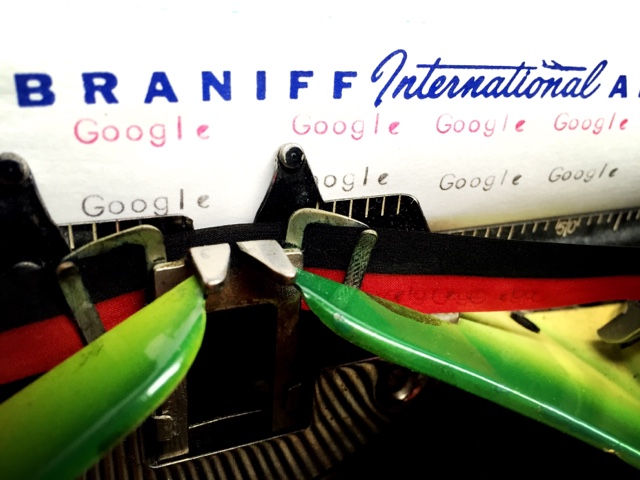 SSSSS... So Shiny is the Gold Smith Corona 5S Silent

Most of the typewriter afflicted are aware of the amazing chrome and gold plated creations offered by Kasbah Mod (now Trillionaire Vintage). One of their best tricks was turning the homely, crinkle finished Smith Coronas into works of art. The world is a random place, and every once in a while a vintage plated machine appears in the netherworld of digital commerce. Thus fell a 5S - one of the best machines ever made - into my hands by way of an ebay seller who posted pretty poor photos. 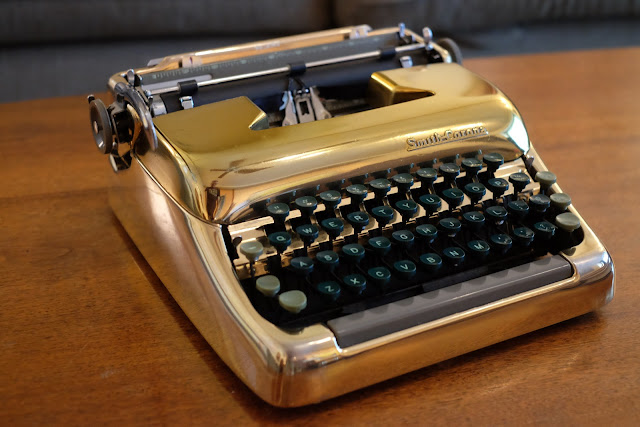 Thanks to Ted Munk's relentless research, we know this machine was made in 1951. When it was plated is anyone's guess, but it is consistent through the machine and includes screws. The sound deadening material is applied perfectly as is the 'Silent' decal on tab adjustment cover. 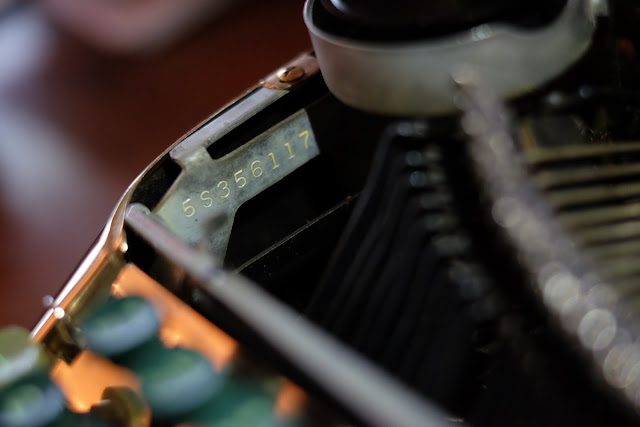 I didn't include the case, just imagine old-school wood with factory black covering. The best part was that the machine and case escaped the must and rust of poor storage for all these years. I did a middling tarnish removal followed with an application of a tried and true Teflon spiked automotive wax. It worked well on my gold plated Royal portable. 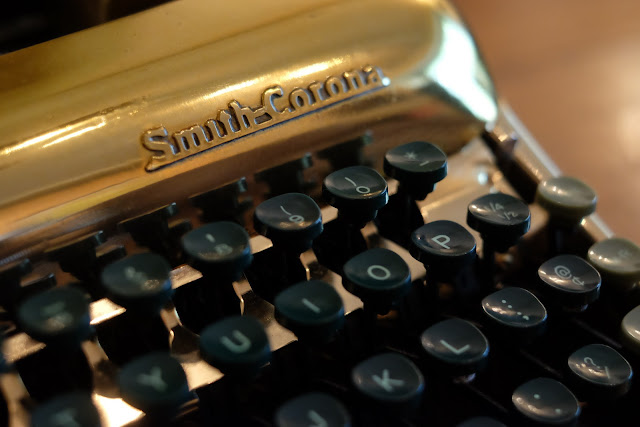 As seen above, the ribbon cover has some kind of a clear coat. Given the thin plating, I am not going to attempt removal. The small piece at the top of the keyboard was covered in dried gunk that cleaned easily with soapy water. The rest of the machine had varying degrees of wax and/or tarnish. Perfect it is not, but look so good I should at age 64. The only significant pitting is on the high touch points behind the paper table. 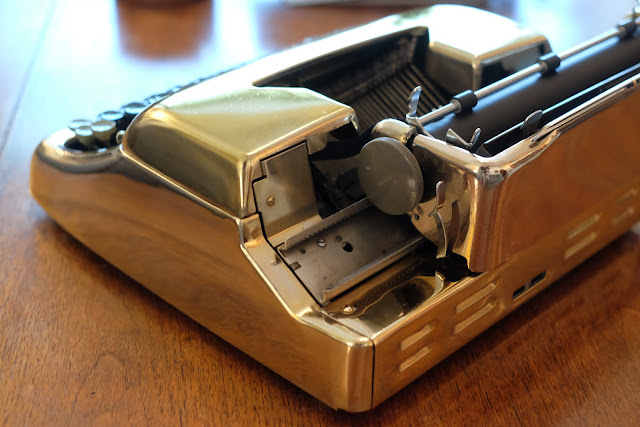 Unlike the Royal, major wear points are still in factory chrome. Sixty years of skin oil were not good for the Royal. 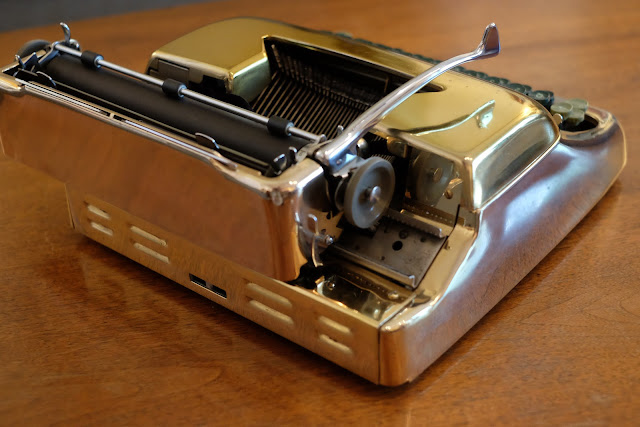 I still need to create a type sample. However, Spawn the Younger and my Spousal Unit often leave the house just after 6:00 AM. They do not abide by late night typewriter clatter. We are still adjusting to school year schedules. 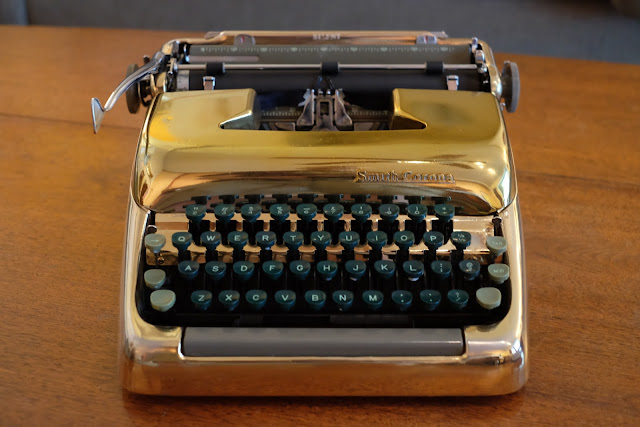 My regrets to all for not posting to this blog more often. My few free hours tend to be absorbed by everything photographic. We have three cars constantly in motion (and an airplane now and then) to support the schedules of two working parents, a Senior in college search and application mode, a Sophomore in marching band, and various other things including orchestra, theater, and my sustainable building related travel.

Over the past five months, we had extended visits at three colleges and have several more in the wings between now and the end of the year. Come January and February, we have scholar days and weekend events to look forward to. Anyway, thanks for reading this far and not kicking me out of the Typosphere during the long, dry spells  :)

Just a teaser for a new arrival that still needs a proper cleaning :) 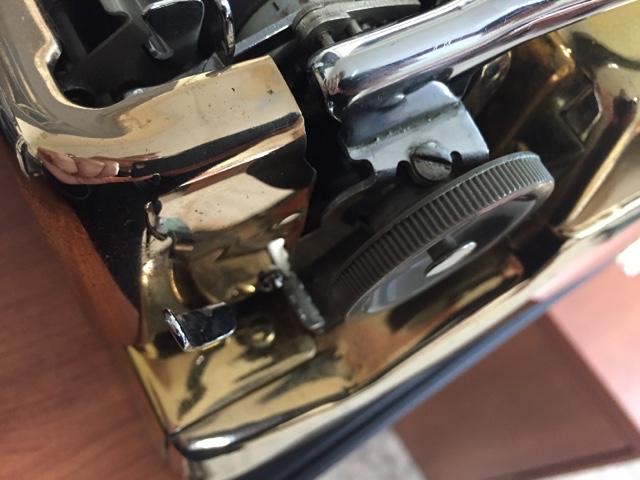 Greetings from an Underwood that should have been introduced a year ago. Busy is no excuse for zombie blogs, but I'll claim it anyway. 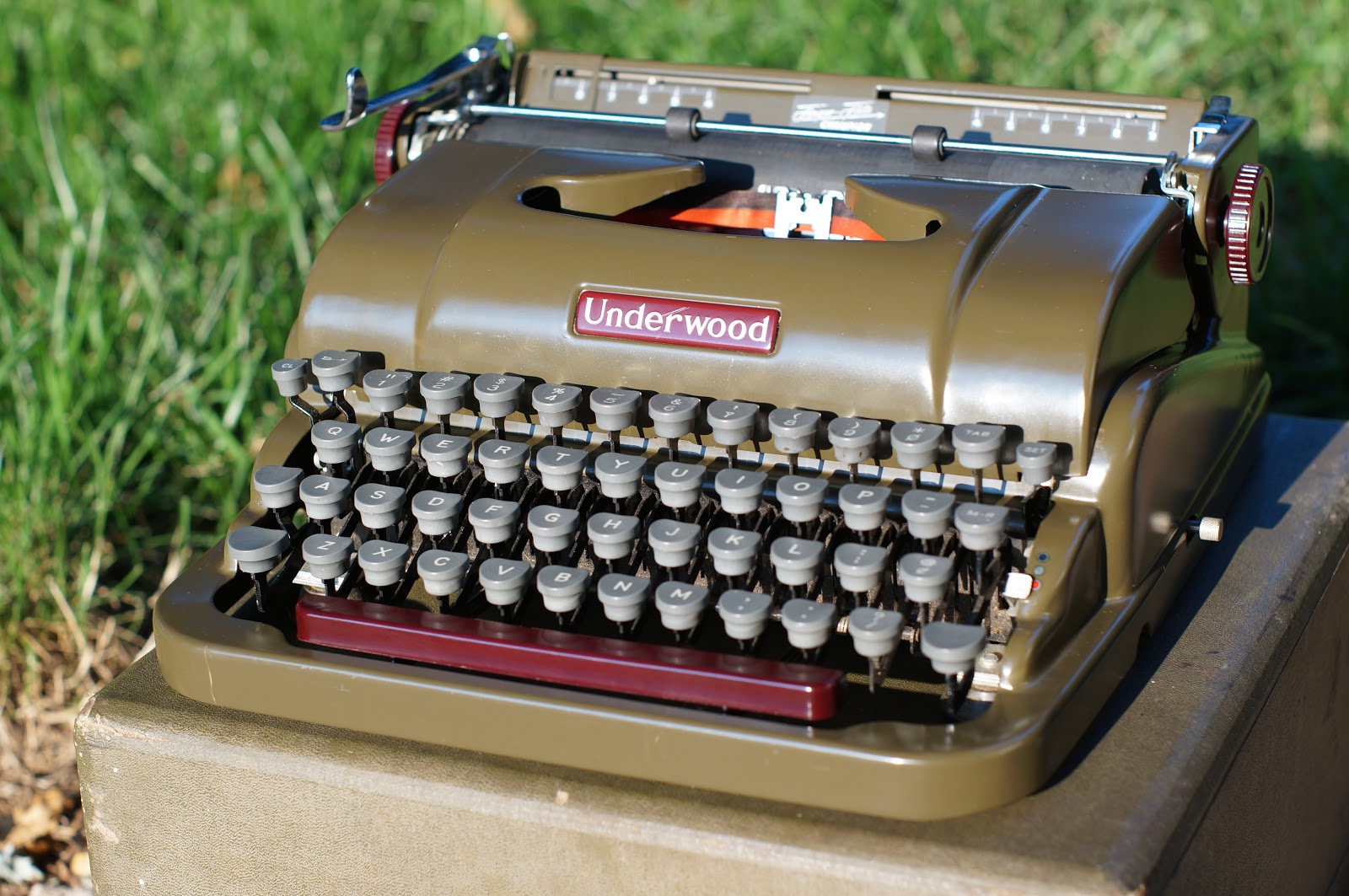 The color scheme on this machine is understated with bits of flair. The green and gray combination have an army look to them, but the burgundy highlights are pretty daring for something military. Either way, it has no service markings. 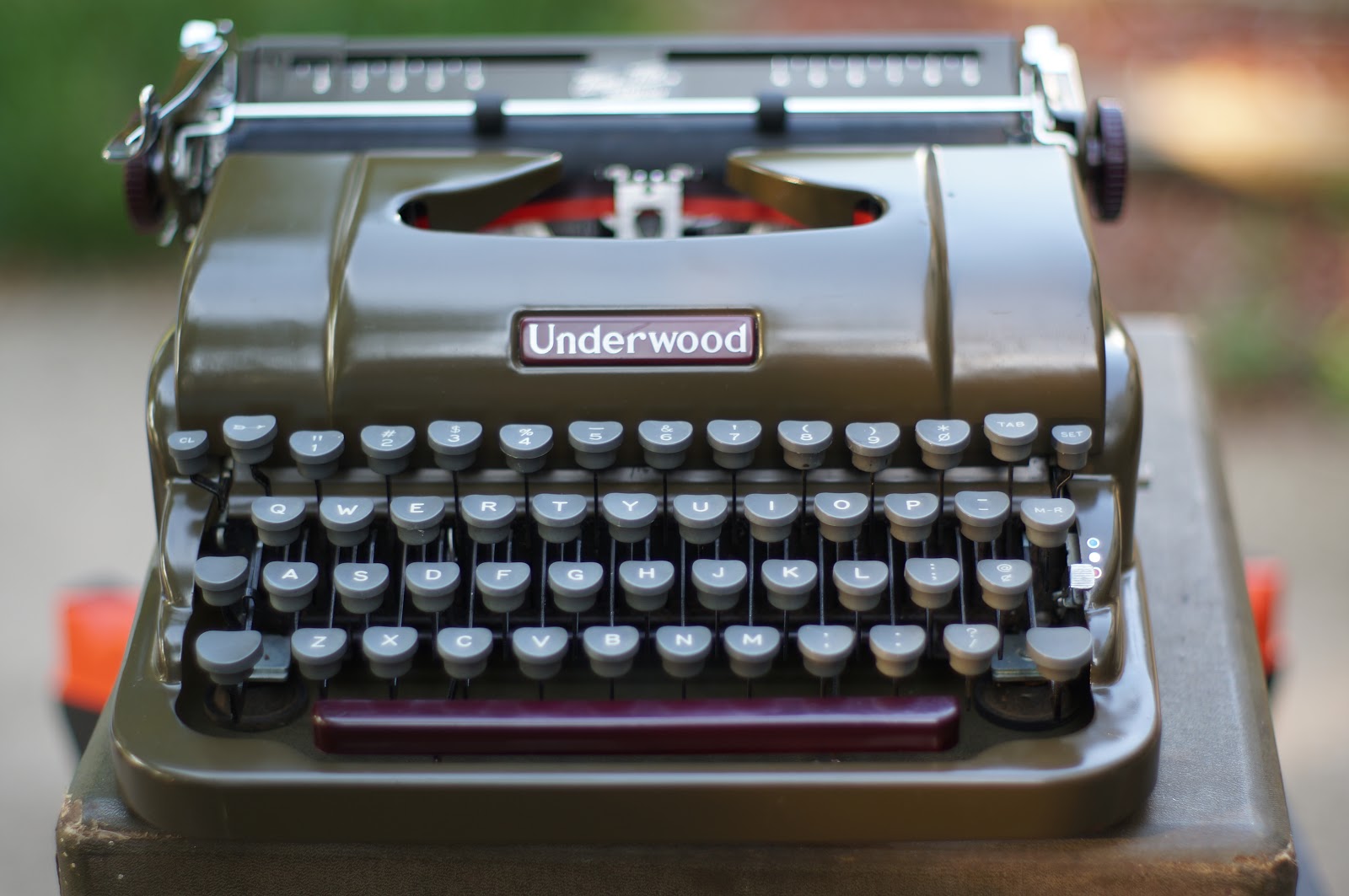 The keyboard is classic mill, but some of the type slugs look like refugees from other machines. There is even a curly 'C' that one would find on an Underwood script typewriter. 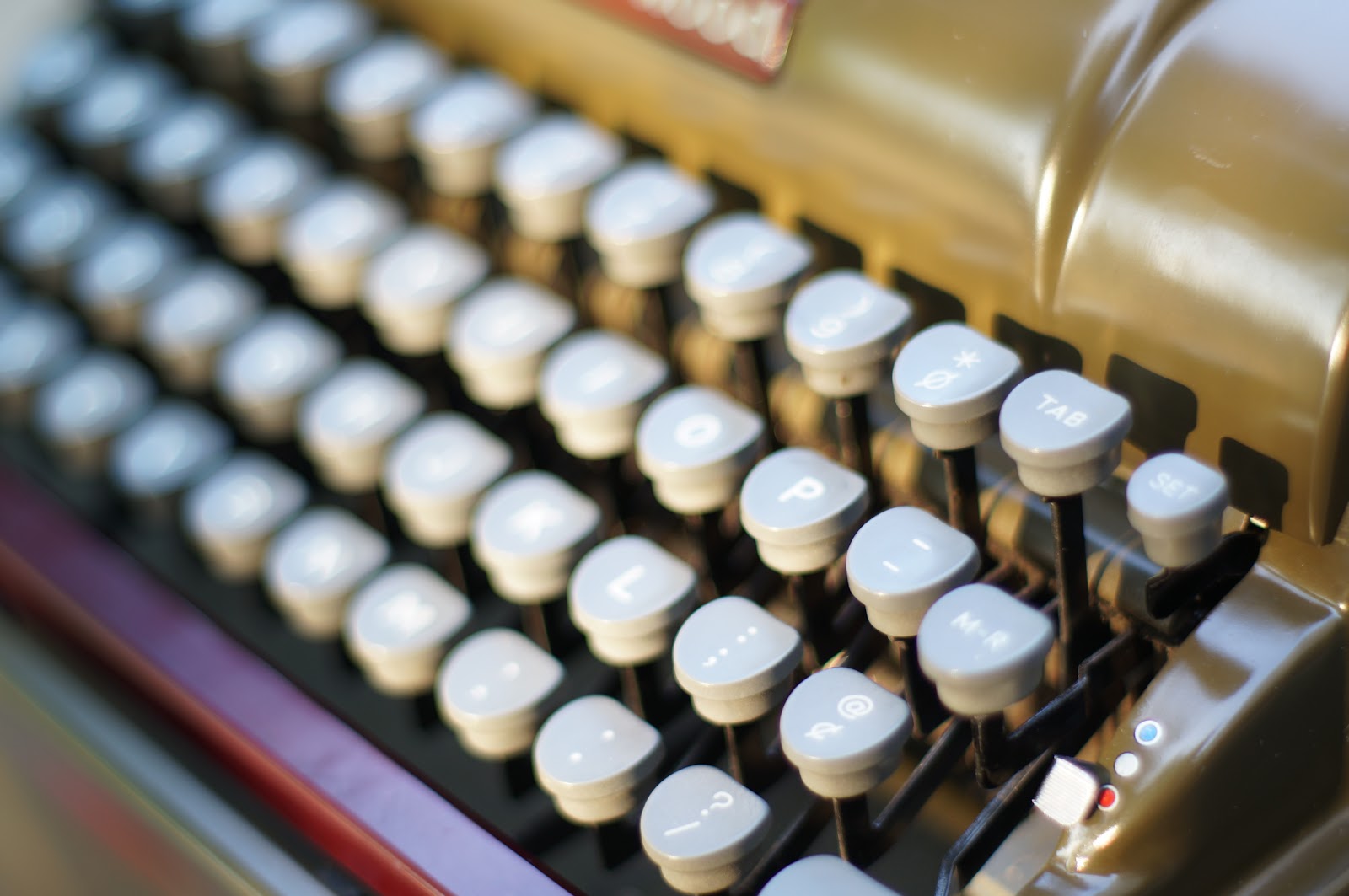 And for posterity, here is a proper type sample. 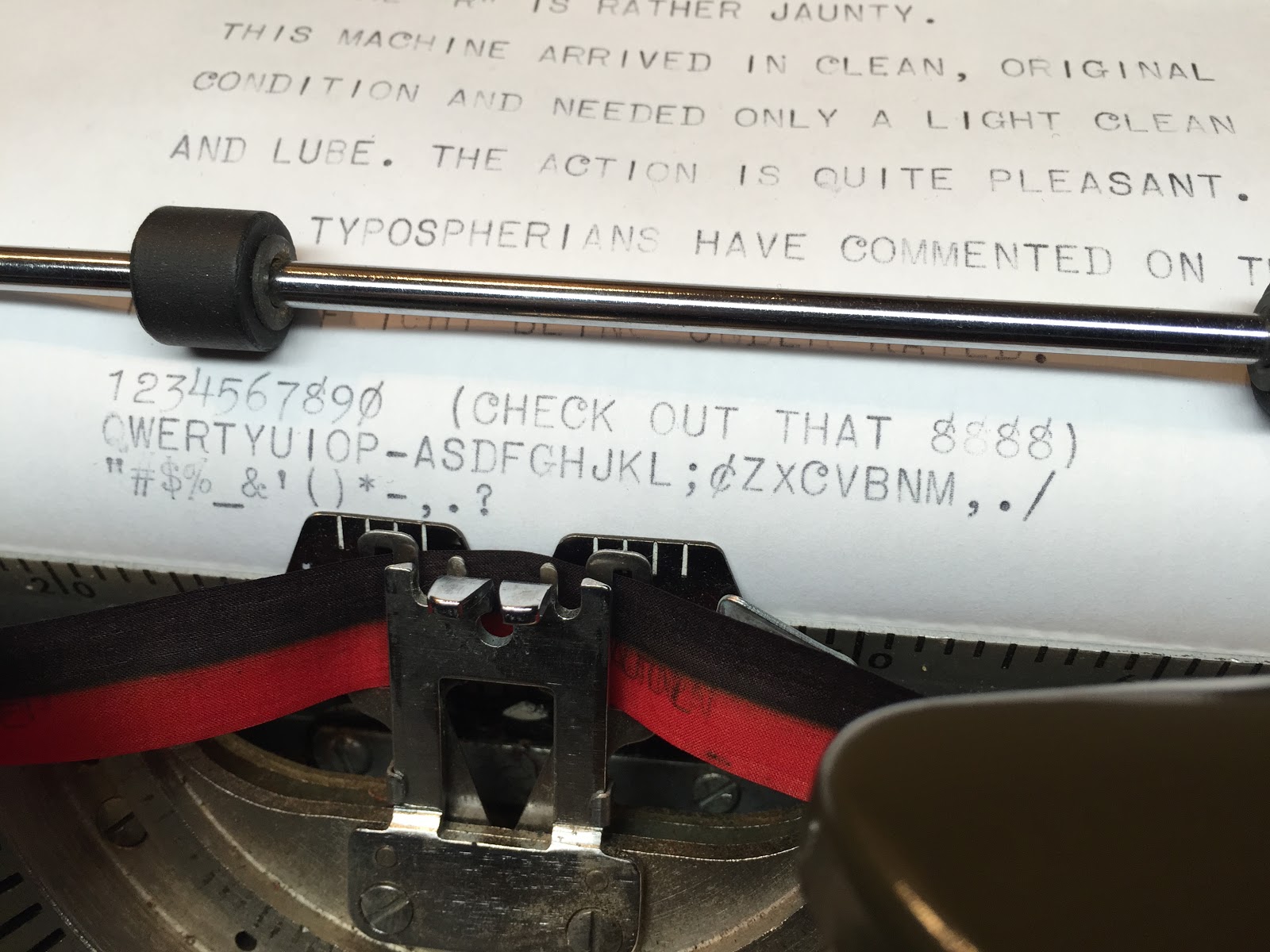 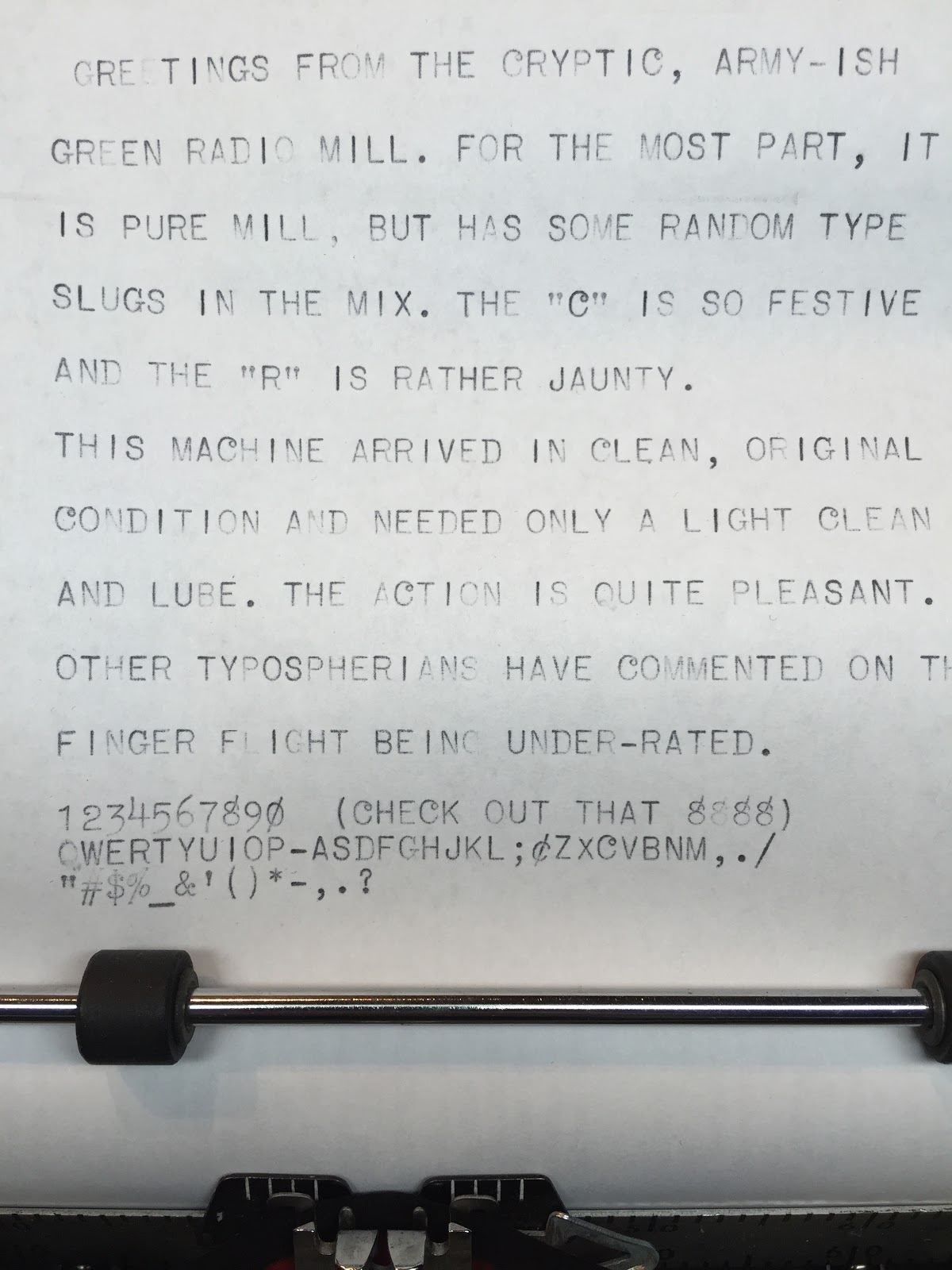 I'm not having any luck finding the serial number - any tips on where to look?

As an aside, I've noticed that Blogger is meshing better with my cache of backed up images. Perhaps I will get around to blogging more often!

Thanks for stopping by!

Please stand by for the usual copyright notice. As in, everything on this blog is copyright Dwayne Fuhlhage. Please share the social love by linking and sharing freely, but refrain from stealing digital content. We have an enforcer and are not afraid to use him. Much. 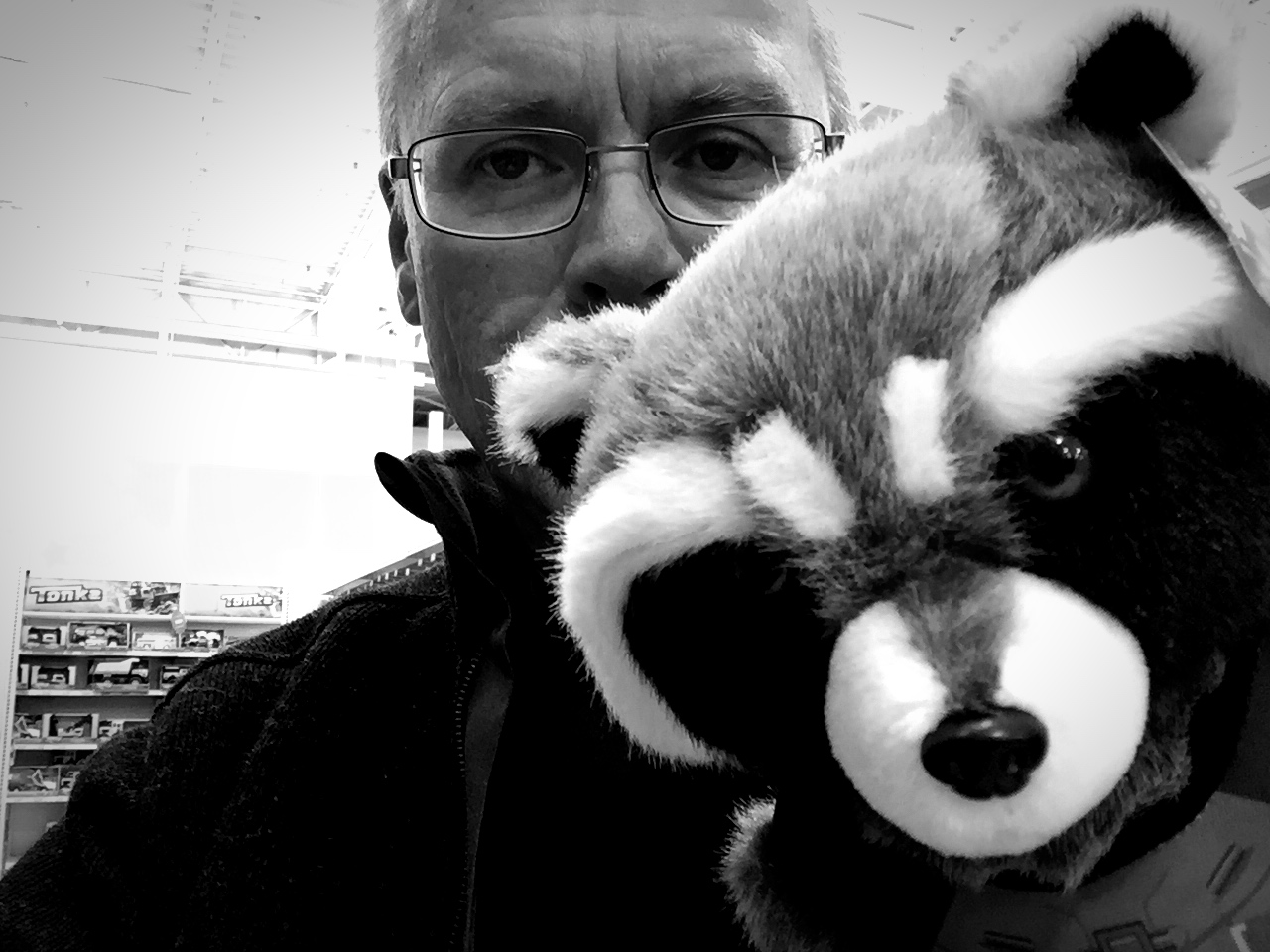 Pi Day! The Ultimate Pi Day of the Century.

Ooo... such a beautiful sequence of numbers this is! Today is the day that Pi and time collide and for an infinitesimally long bit Pi is repeated forever...
At least in the artificial construct we call time. All I know is that we don't have enough of it. Even Elder Spawn got to experience little of the small death known as sleep this week with homework and rehearsals. She is a number fanatic and obsesses about sequences, but is opting to sleep in. We have another chance in the PM, but we will be watching Joshua Bell from the third row center at the Kauffman Center.We could be on a cruise ship full of Spring Break extroverts instead. Nah. 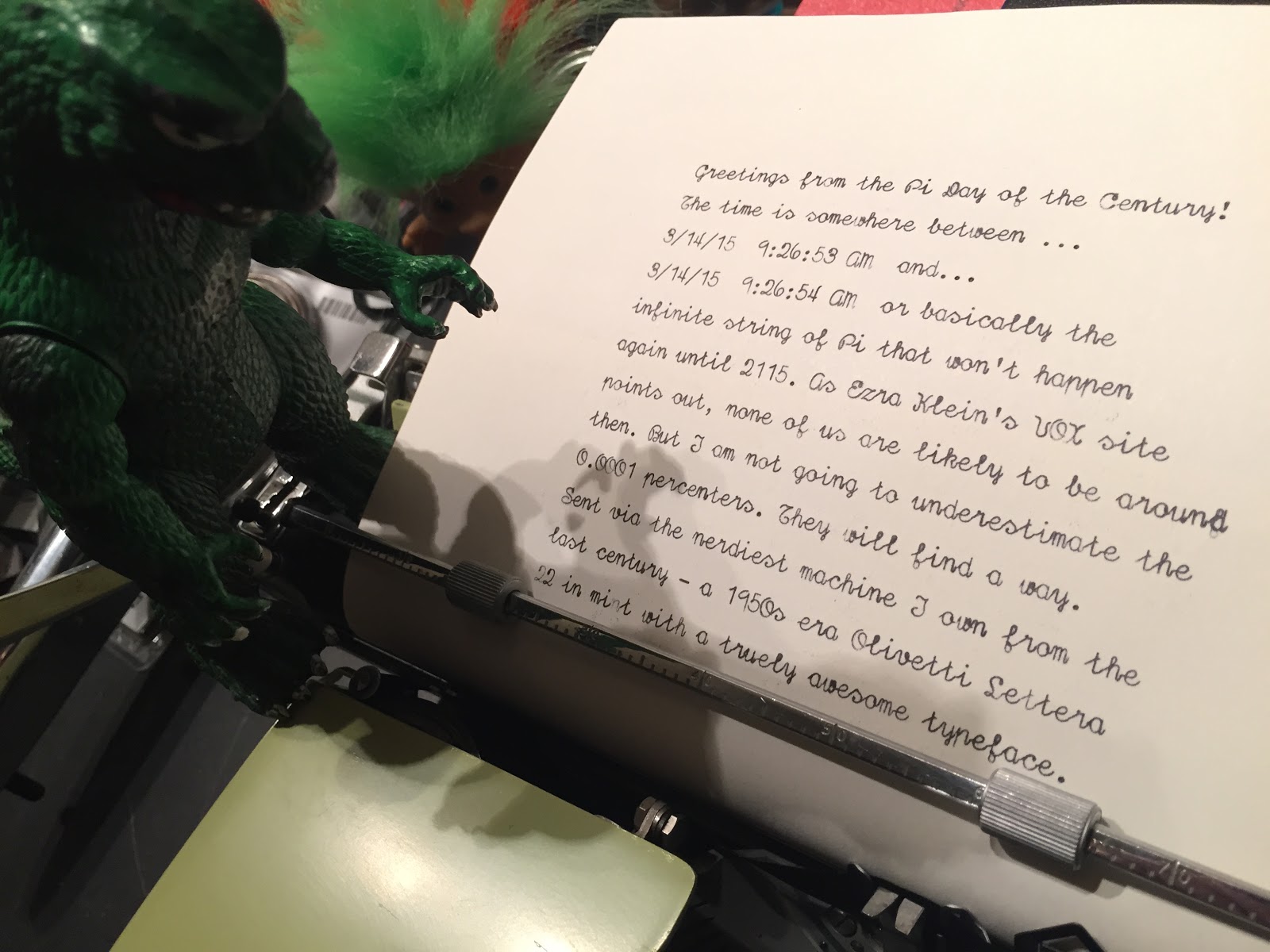 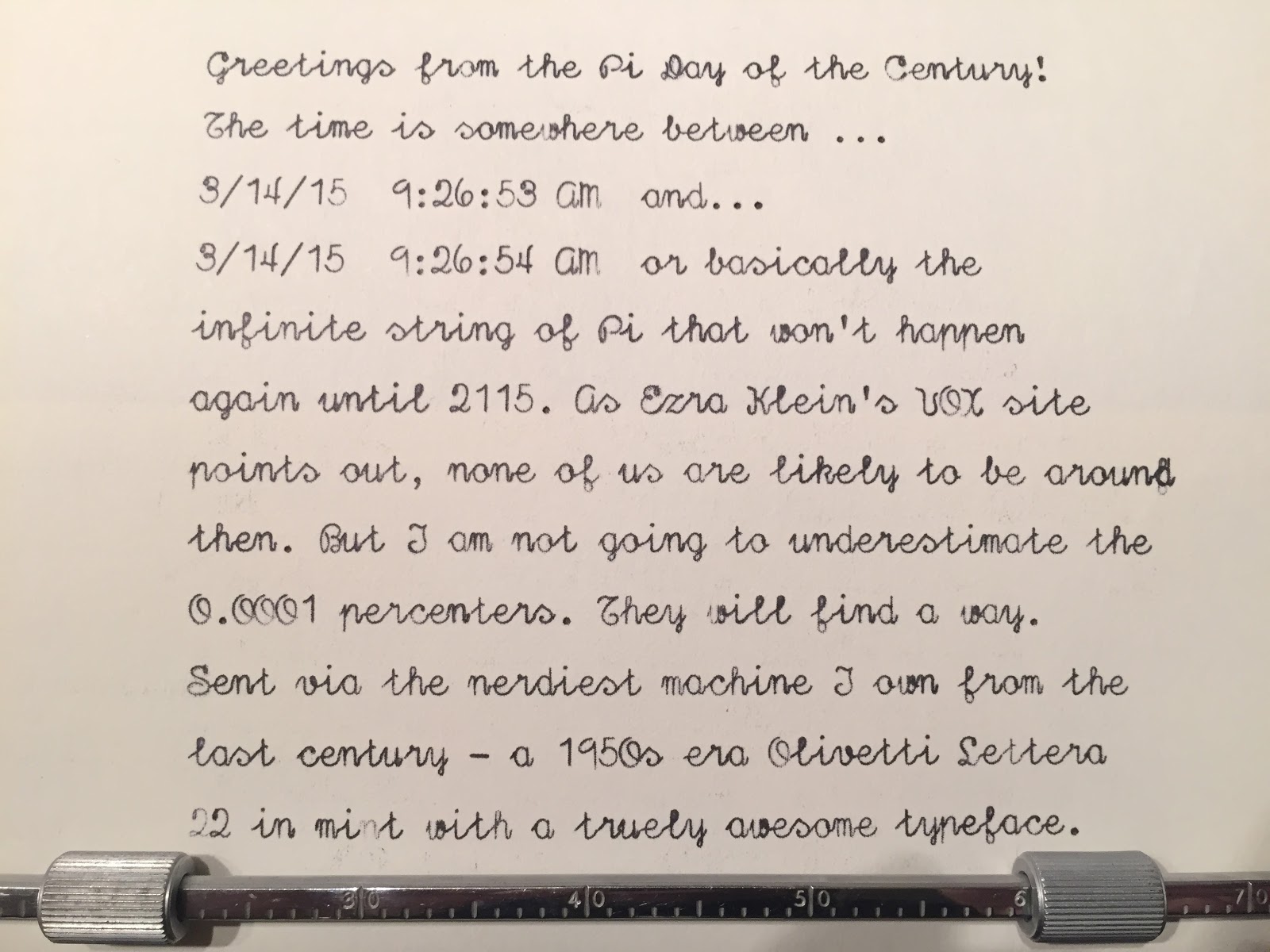 Thanks for geeking out with me!
Posted by Dwayne F. at 9:26 AM 4 comments:


Typewriter nerds, rejoice! The Typosphere is just an awesome place and this practically knocked me over when I read my email this afternoon.

A typewriter collector, Peter Weil, contacted me the long way around through uber collector and advocate Richard Polt. He came across the above image of the eight-millionth Remington, a Noiseless 8, being used alongside a Sholes and Glidden prototype that would lead to the first Remington. The plate on front is a dead giveaway. It is indeed the machine in my possession by way of a New York City ebay seller several years ago.


We know from the plate on this machine that it was just a few weeks old at the time. This fills in some historical gaps. Here is more than you would probably want to read about this machine:

Here is the history of this photo as told by Peter Weil. Substitute 'Remington 8' for 'Portable 1'.

"On March 23, 1933, the YWCA held an event to commemorate the 60th anniversary of there invention of the typewriter. More specifically, The focus of the celebration was “…the entrance of women into the modern business world.” I find it dumbfounding that Smithsonian would have loaned the Sholes to them, but my guess is that the YWCA had a lot of clout in Congress to succeed in bowing so important an artifact. I suspect that this specific version is a bit earlier than the one made famous by the image of Sholes’ daughter typing on iyt. Note that these keys are ceramic ones, as on the earlier prototypes, whereas the keys on the example used by the daughter are similar to the latter metrakl-ringed flat ones covered with glass that were used on the first fully marketed Sholes and Gliddens in 1874. I think it also interesting that the YWCA selected a Remington Portable, admittedly, the largest they made at the time, a Model 1, to contrast with and to indicate progress since, the Sholes machine. The # Model 1  was a borderline office machine, but it was a not a full one. Perhaps because it had just been introduced into a tighter office market created by the Depression, Remington, who probably loaned it for the event, wanted it used.

The Acme Co., a news service, printed and distributed multiple copies of the photograph, headlining it as “”How Types Have Speeded Up.” In their caption, they also draw primary attention to the contrasts in the clothing of the two women typists. Clearly, faster types, faster typists (literally and figuratively), and real progress for typewriters and women! (yes, I am being facetious)"

Thanks Peter and Richard for helping tell the history of this machine!
Posted by Dwayne F. at 5:13 PM 3 comments: