Gojira vs. the Mayan Destructors!

Godzilla is back and he's mad!  But can he save us from the Mayan Destructors?

Agent Svetlana Optima is still on the job and has gotten close enough to watch the terror unfold.

The Vintage Technology Obsessions team was pretty optimistic when the photos started coming in over the satellite uplink.  Godzilla has some new and unexpected tricks!  Sure, he vacillates between being for or being against human civilization, but today he is with us and that is all that matters.

The photos gave us a lot of hope.  Godzilla has faced much worse.  Mecha Godzilla almost did him in.  The King of Monsters will not be denied!

And then a message was delivered from the office to our underground lair: 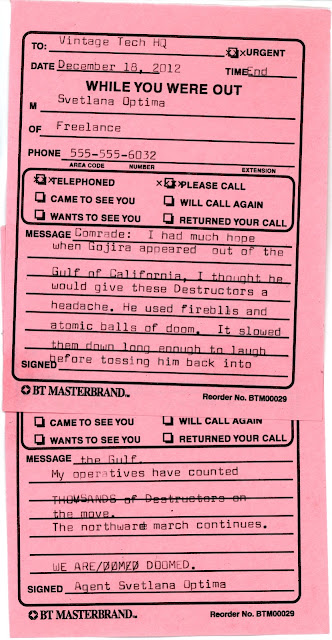 That's it.  Three more days and it's over.  We don't even know what happened to that brave giant robot who did battle with these same Destructors yesterday.  Godzilla didn't even slow them down.

The EMP from the last atomic blast took down Svetlana's sat comm.  At least the Stasi built up their agents' resistance to radiation.  She is a survivor.  We should be so lucky.