Summer travel, garage sale season and time to browse have coincided to present some interesting typewriter sightings. As my tastes become more refined, fewer machines make the cool typeface or rarity cut that would cause me to bring them home. Hence, another round of catch and release typewriters.

This was my favorite from the weekend. The machine is electric, needs a ribbon cartridge and relatively common, but the placement with black velvet is 100% win! 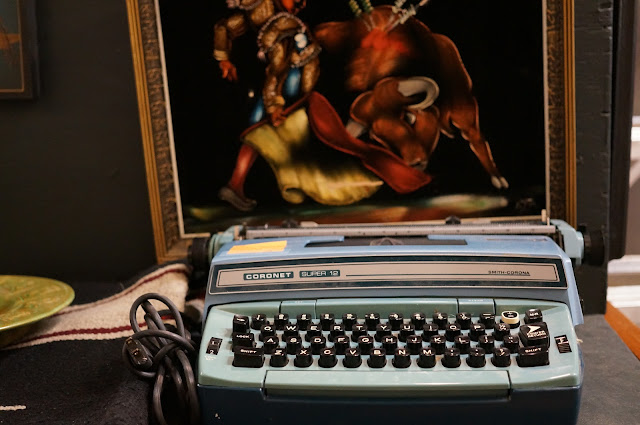 More from the same antique mall... 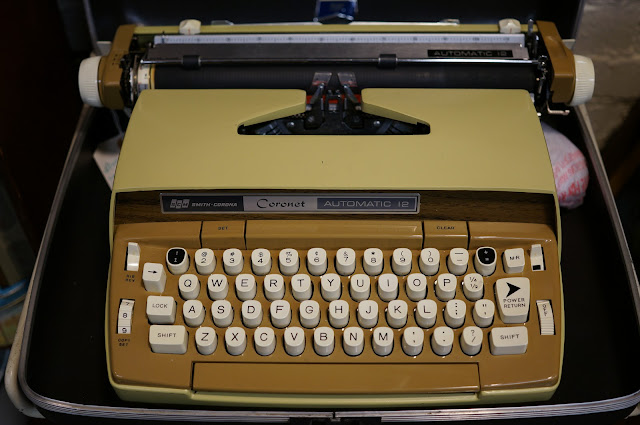 At least this Royal would not interested key-choppers. Those are replacement keys. The carriage is huge! 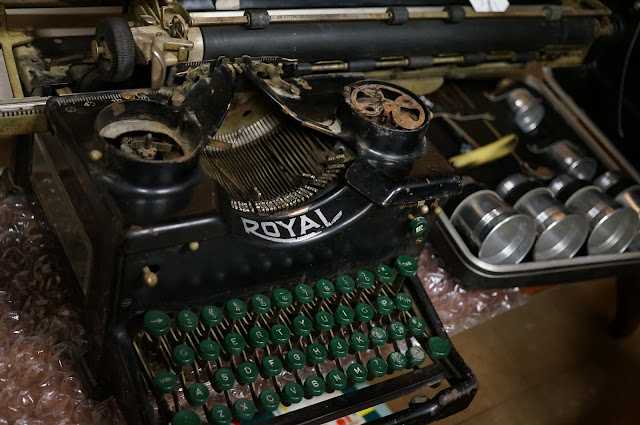 Going back in time a bit, here are a few more interesting machines. We'll start with the uber-cool Raspberry Pi powered IBM Selectric at the Kansas City Maker Faire.

And back to normal machines... 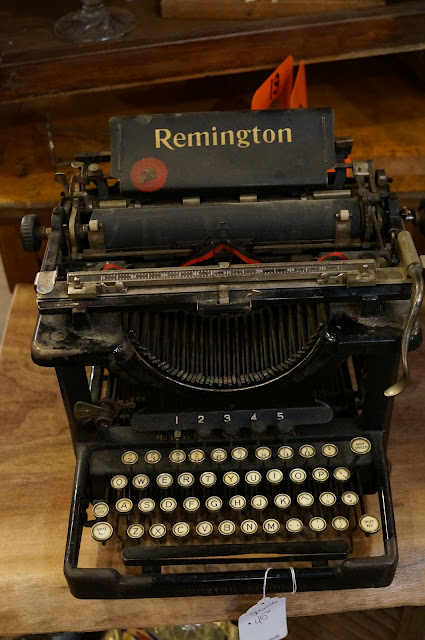 Most of the standard machines I run across are of the Underwood and Remington variety. I was overjoyed to find a Noiseless and an early IBM electric. What a tank! This was in one of those odd, outdoor flea market zones. Given the heat and humidity in our region, these are doubtless hunks of rust by now. 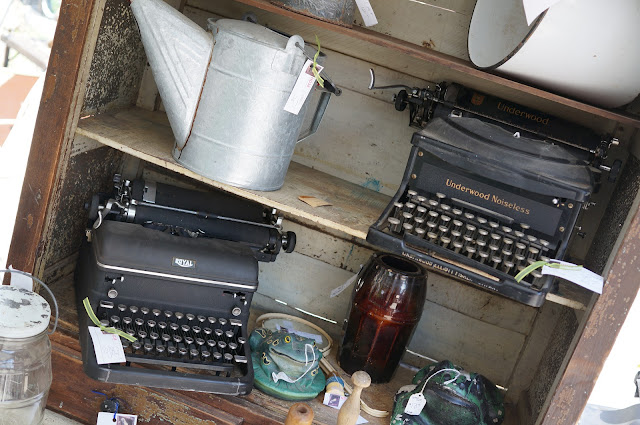 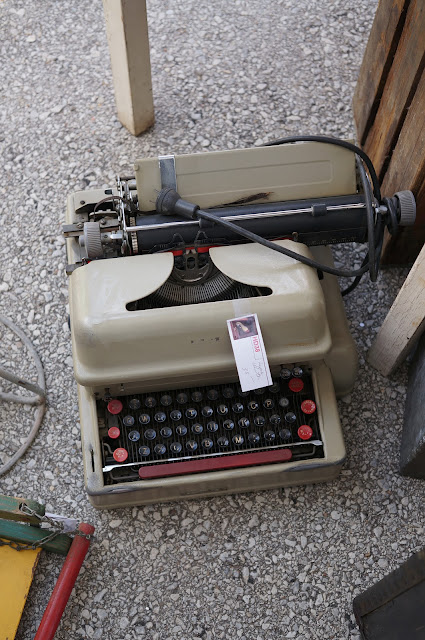 Witness the King of the Ginormous Carriages. Dang. 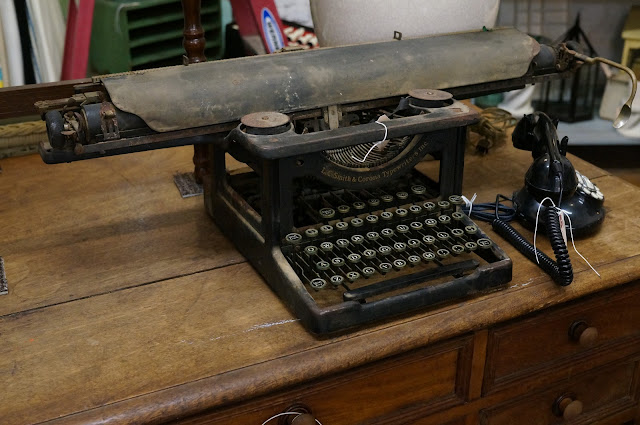 "Recent" is a relative term. With kids in middle and high school and two working parents, time has flown by. Some of the machines below are from April and May, but that seems just like yesterday. 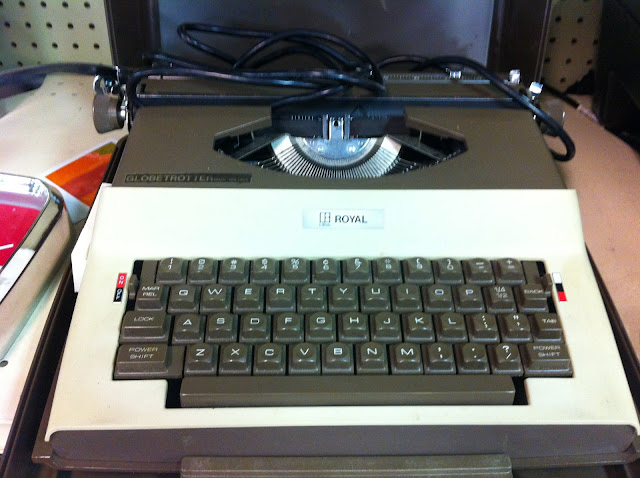 This brother deserves two photos. Finding a German keyboard in middle-America is an odd experience. 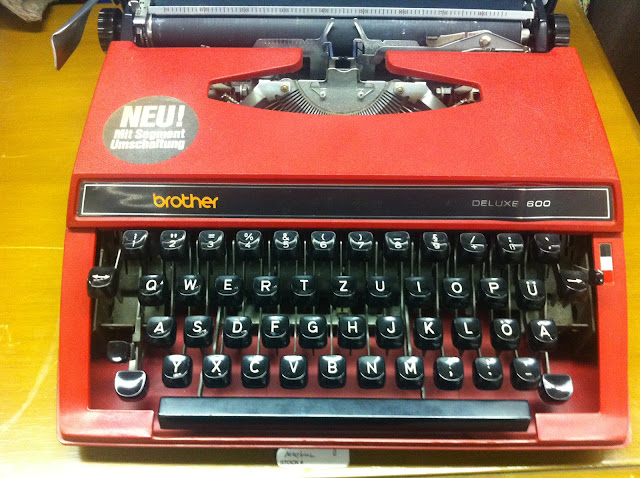 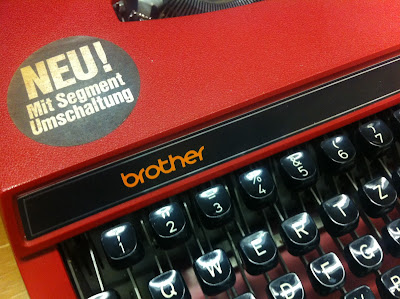 Yet another Galaxie. It seems to me that the age of machines appearing in thrift stores and antique malls is creeping upward. That would make sense as households are liquidated and cleaned up. 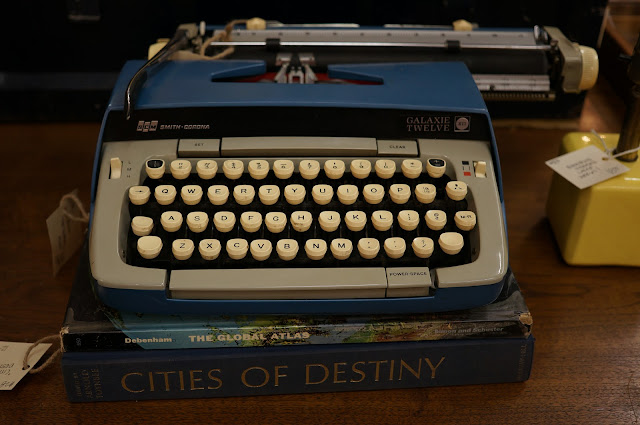 Two Royals. The white QDL was an interesting sighting. It functioned perfectly. Alas, it had a standard typeface dating back to the earliest Royal portables. 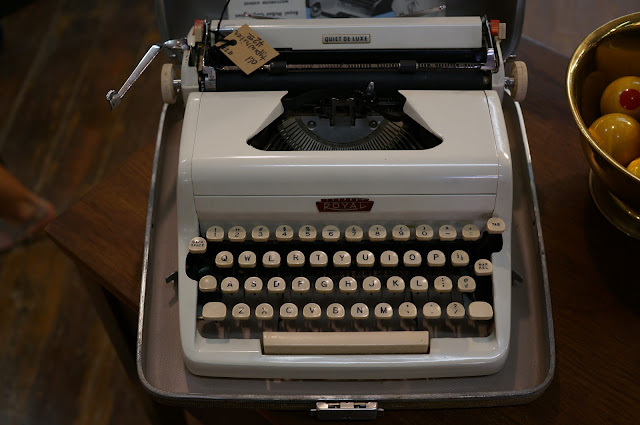 "I am Futura of Borg. Prepare to be bored to death by my color scheme." 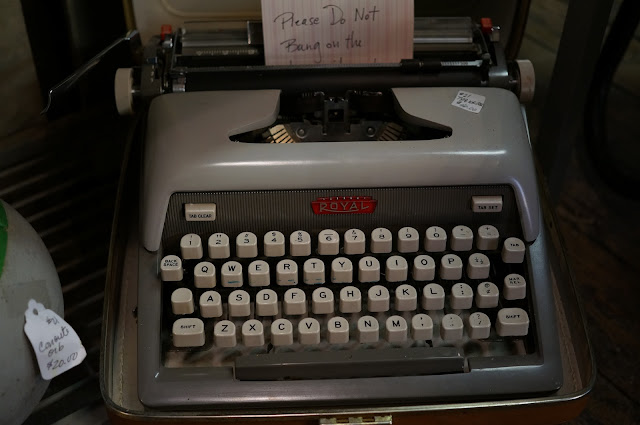 This poor Underwood was probably harvested for its keys. 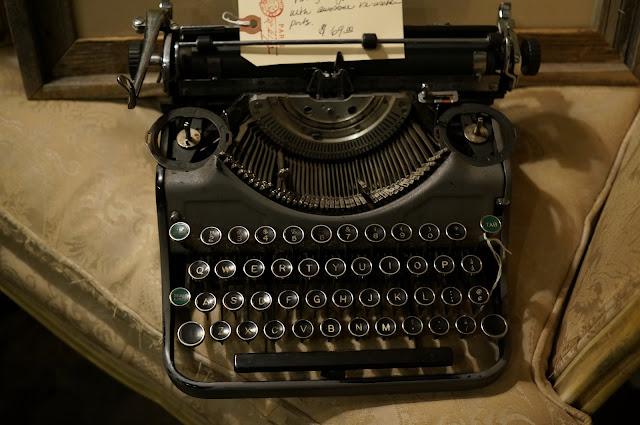 Finding any Hermes in the wild is rare in my part of the world. This one worked well and I was sorely tempted to bring it home. 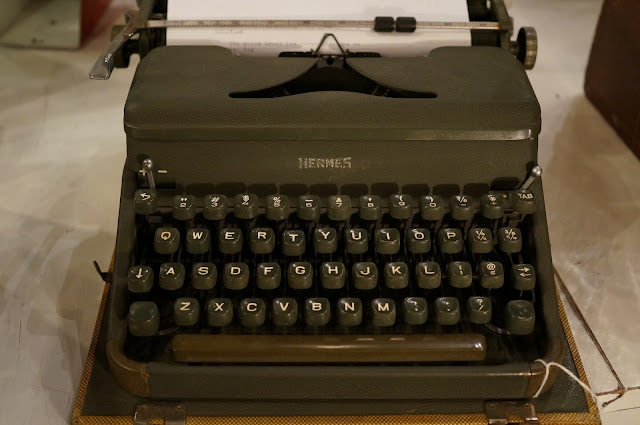 I've been impressed with the light action on the Underwood standards I've found in the wild. They aren't sexy, but they appear to be good machines. 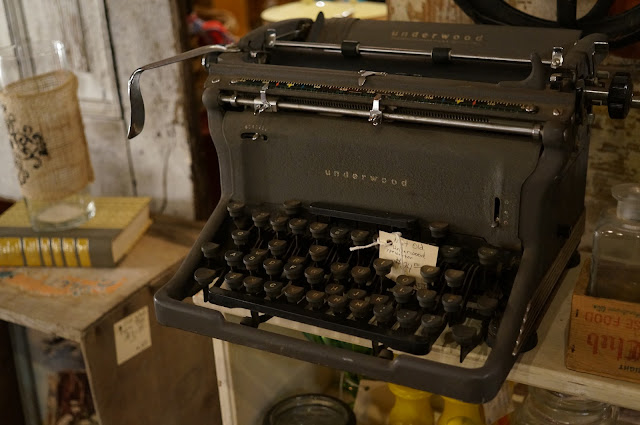 I'll leave you with a really nice Remington portable located in one of the better monthly antique stores in the Kansas City West Bottoms. 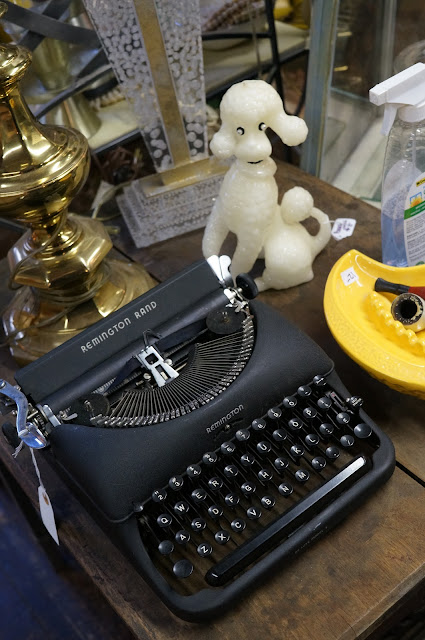 I'm pretty far behind in my blogging. The good news is that I typed almost everyday during our family vacation. The night before Tesla's birthday, I hit the 50,000 page view mark. That is a blog topic of its own, but it will have to wait. I also have two newer arrivals to show. One is a rarity and the other is an oddity. But first, I have yet more shooting to do at upcoming County Fairs and demolition derbies. Ah, summer!

Ready for some Tesla action? How about Arc Attack playing a geek favorite?

Like the beloved Doctor, I am bumping back and forth in time. I shot the video on June 28, 2013 at the Kansas City Maker Faire. Semi-fascinating detail: the video jumps in the first thirty seconds. Electrical resonance is an interesting thing. The vertical posts on one of those small crowd control barriers was aligned with the coils. They were toasty and tingly. The people leaning on the horizontal top rail didn't notice a thing.

Through the miracle of Blogger scheduling, I'm writing this blog entry on August 17, 2012.  Really, is it possible to plan Tesla Day too far in advance?

Here in August of 2012, what reminded me about this was an article in the Guardian UK about a fund drive to buy the famous Wardeclyffe property.  Agfa film spent millions cleaning up the toxic mess left by a company it had acquired.  It is on the market and the owner of The Oatmeal website is leading a Kickstarter drive.

It happened! The Oatmeal indeed raised enough money to purchase the property and have some seed money left for a museum.

We are happily on vacation in a far away land. Your comments are not lost, but they may not be moderated until July 15th. Thanks for reading!

Semi-creative Copyright Statement: Use these words and images for commercial use with permission, you shall. All original content is Copyright DwayneF of Vintage Technology Obsessions. Like, link, repost, Plus1 and share the Blogger love. We have implied threats beyond legal remedies involving Tesla coils - just an FYI.

As is typical in geek events, cosplay characters roamed the show. The Iron Man entourage was a big hit! The female Iron Man was a little scary. 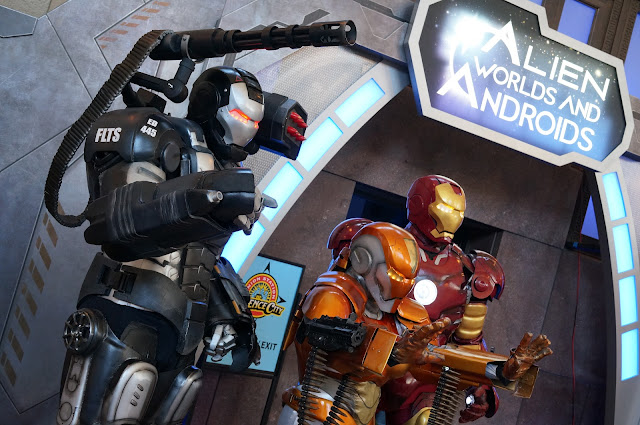 Gingercat was wielding my old Sony NEX-3. She now has a weapon to shoot back when she catches me aiming a lens her way! 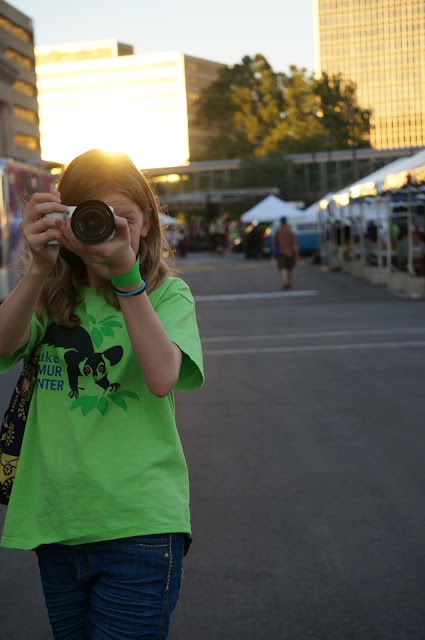 Last year, I posted about a great IBM Selectric conversion. It has been updated and no longer needs a laptop to drive it. See version one at http://vintagetechobsessions.blogspot.com/2012/07/maker-faire-kc-part-1-printing.html

The creator had fun wandering around is costume as well. The Hammerspace makerspace and the Cowtown Computer Congress shared space and projects at the show. 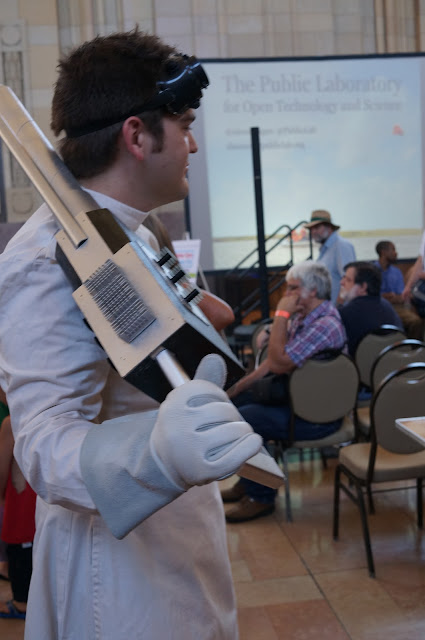 And in the fun and weird category, here is a creation from one of guys at Hammerspace. He built this contraption in two weeks out of scraps laying around the shop. Children fish for babies to feed to the mother. No worries; new babies come along just as quickly.

Inky goodness! The lino cut print goes in my office. The best part about Maker Faire is getting to meet and talk with people about their projects.

This sculptor does large scale bronze. His pantograph device is pretty amazing!

Maker Faire wouldn't be complete without PowerWheels racing! This is what you get when you mix adults, battery powered kiddie cars and a whole bunch of modifications. They staged racing heats and endurance runs over the two day show.

We were happy to see Super Awesome Sylvia and her Dad, the Tech Ninja. Sylvia was showing her home brew WaterColorBot. She earned a spot at the White House Science Fair and got the run of the house while the parental units chilled.

This one is for Richard P on the current state of 3D printing. I reread his comment from last year regarding 3D printing. It was everywhere and is barely a novelty among the maker crowd today. Later this year, Staples will carry a household printer for less than $800. Kinkos may start printing services in stores. People are using Google Hangouts to collaborate on countless useful projects including mechanical hands, artificial limbs, machine parts and casts. Auto parts are made out of sintered, printed metal and MIT is experimenting with printing entire buildings.

Kansas City even has its own R2D2 builders club. These are not your run-of-the-mill models. Note the machined joints. Gorgeous!

Members of the Airship Noir group ran a little experimental station. I think this guest is being reprogrammed. Be sure to read the sign on the Jacob's ladder.

With almost 300 makers in the house, Union Station is getting pretty crowded with overflow in the parking lot and most of Science City. We almost didn't stop in one of the side rooms. Good thing we dropped in or we would have missed this cool device. What a great way to use unloved analog technology!

The photos here and on Google+ don't even scratch the surface. The show is a phenomenal success. The maker movement is strong in Kansas City with abandoned buildings being turned into maker hives. There is a reason why Google chose Kansas City for its first fiber Internet project. For more technology and artistic greatness, checkout #makerfairekc on Twitter. 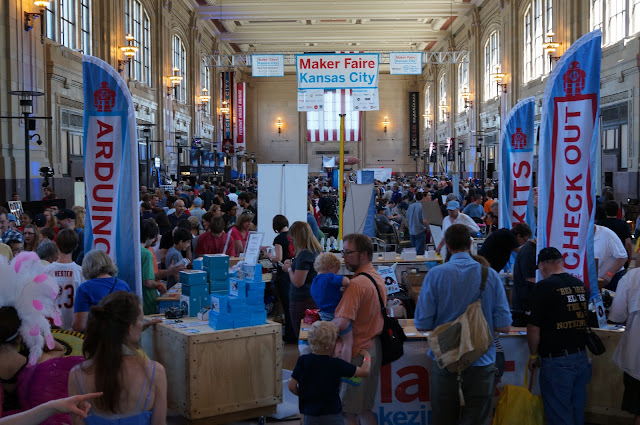 I'll leave you with one of the headliners taking one of Nikola Tesla's inventions to the next level.


Yet another Copyright notice *sigh* Yep, the words and images are Copyright DwayneF of Vintage Technology Obsessions. Having tired of vague threats, I will simply remind the reader that all content creators deserve their due. Please like, share, post, Google +1, etc. and share the social love. Follow and I will likely follow you back. Commercial use requires prior written authorization from the Copyright holder. And so on... 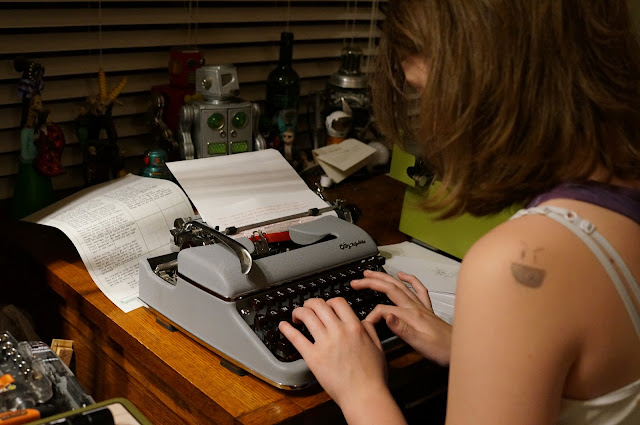 Happy Typewriter Day to all of you! May you attract many new converts to the cause and may the typewriter of your dreams show up at a thrift store for five dollars. Miracles do happen!

Before I sign off, I have to share two images from our day at the Art of the Car Concours in Kansas City. It was, after all, our distraction from the awesome that is Typewriter Day.

Image the First: My other daughter has taken to photography like a duck to water. She has excellent situational awareness and likes being on the other end of the lens about as much as I do. 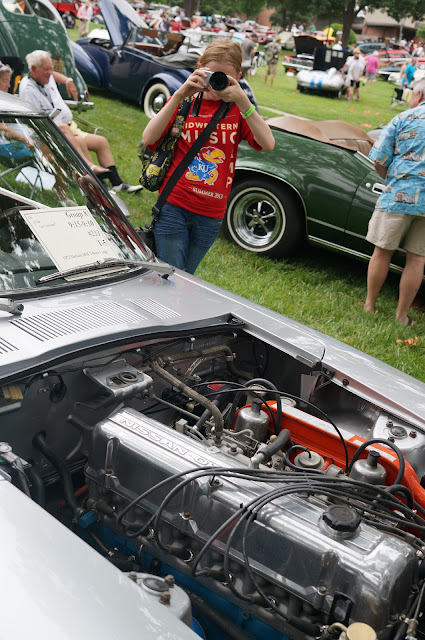 Image the Second: Because she was enjoying the cars and taking loving photos, some owners struck up conversations. One couple invited her to sit in their drivable show car (the best kind in my opinion). 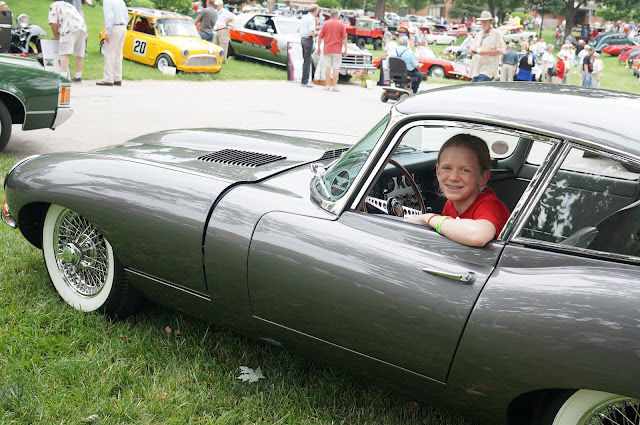 Yes, the cars were a distraction, but I hope they made you happy, anyway. As always, thanks for visiting my little corner of the Internet.

Greetings members of the Typosphere and denizens of the Cult of Olivetti! I'm pleased to introduce our newest traveling companion. It is a Lettera 22 of a slightly different stripe. 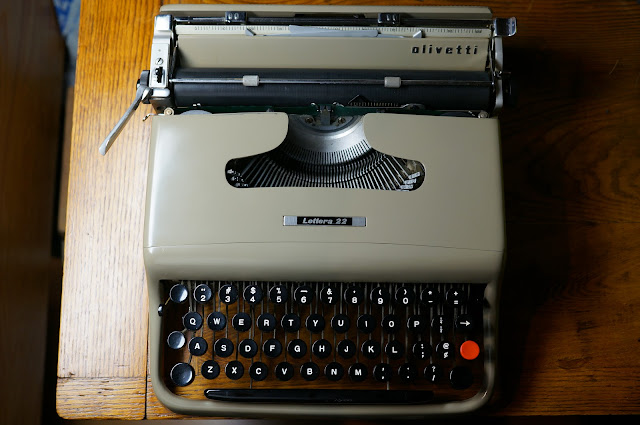 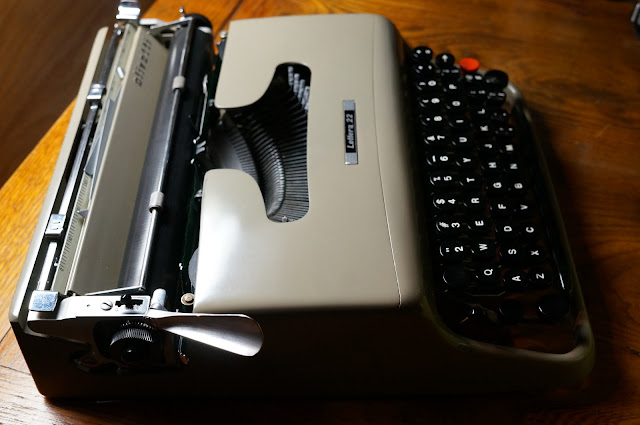 I've said it before and I will say it again: I am absolute sucker for embossed paper tables. They are a totally superfluous and would have added to the cost of a machine. That is precisely what makes them desirable design details. To an extent, the embossed table is an element of industrial design from a long gone era. Its like the logo embedded in the back an iPad. I am not an iDevice fanboy, but I do appreciate design. 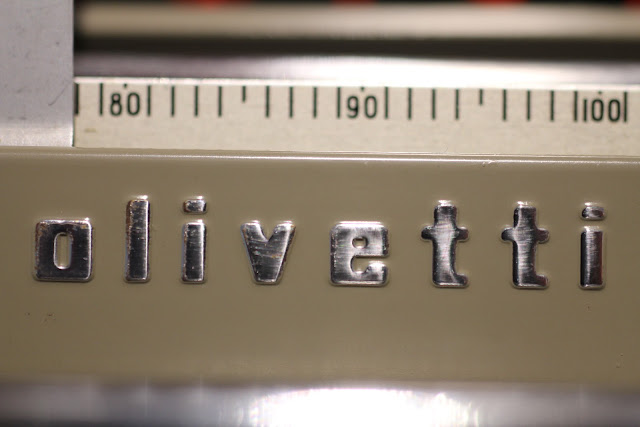 I've contemplated getting a L22 for a year or so. This one popped up on ebay and I knew it was just what I wanted. There was even a typing sample that verified function and typeface awesomeness.


Here is the Lettera 22 with its office sized cousin, the Lexikon 80. Now that I have each model, I can see the design integration so often discussed by Ton at I dream lo-tech. The body styles resonate, but the similarities go deeper with a shrink ray being applied to carriage controls and the carriage bearing and margin stop system. 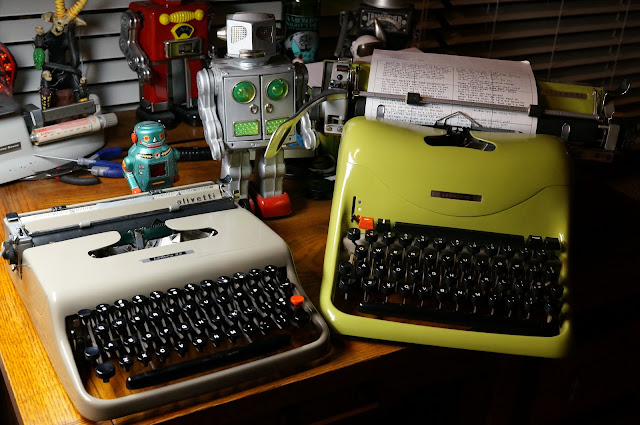 It is a happy coincidence that I happen to own machines made at almost the same time, in the same factory and with the same typeface. The Lettera 22 is a common machine having been made for decades. I'm glad I waited for just the right one come along. It will be a wonderful companion for our family summer vacation.

Experimental hashtags: I'm curious to see if these get picked up directly by Google+. Have any of you tried integrating Blogger with G+? Comment and search integration could be awesome, but I want to see how it is working for others before committing. For those of you already on Blogger, I recommend trying out G+. The hashtag functionality is helping make it less of a digital ghost town and the Communities are awesome. Having exposure increased through Google search is a plus. G+ is now number 2 in social traffic behind Facebook.

Obligatory and Probably Ignored Copyright Notice: The words and photographs on Vintage Technology Obsessions are Copyright DwayneF. They may not be used for commercial purposes without explicit, written permission of the copyright holder. Please spread the blogging and typewriter love by commenting, sharing, linking and tracking back to this blog or my G+ presence. In the vague-an-unspecified-threat department, I have a small army of giant robots and monsters at my command and I am not afraid to use them. Just saying.