These aren't the Droids you are looking for.


I made a big mistake.  I forgot we were in the depths of Winter when I posted the sad tale of Annabelle the bear in the "Princess Doesn't Live Here Anymore" post.  I've decided to change up the order of scheduled posts in order to bring you, kind reader, something relentlessly cheerful.  And what could be more cheerful than toys?

Being prototypical Nerds, we are, not surprisingly, Star Wars fans.  I say that in the best way, as in having watched the films in the theater and seen the lost Luke-hanging-with-his-worthless-friends-at Toshi-station footage at a small Con in 1981.  In our world, we can still remember the matte outlines around the Tie fighters and distinctly remember Han shooting first.  Greedo didn't stand a chance.  By the way, Han never stepped on Jabba's tail and Darth Vader distinctly does not cry out in anguish.

Alright, we are militant, purist Nerds.  Guilty as charged.

Star Wars brought a lot of cool things into the Nerd underground.  The whole concept of fully functional robotic servants and spies was pretty awesome.  Of course one of the fundamental principles of economics is that success breeds success.  Sometimes that takes shape in one of my favorite things:  bootleg toys.

Behold the madness that is Hong Kong bootleg Star Wars toys!  Creating bootlegs is easy.  Making them memorably strange takes a bit more effort and a pinch of creative insanity.

Step 1:  Copy basic forms from a popular film.
Step 2:  Rummage through the molds of knockoff toys your company has already made.
Step 3:  Mix and mutate!

The image below comes from a Hong Kong toy trade show catalog from the early 1980s.  I was fortunate to snag three years worth of these on ebay a couple of years ago. 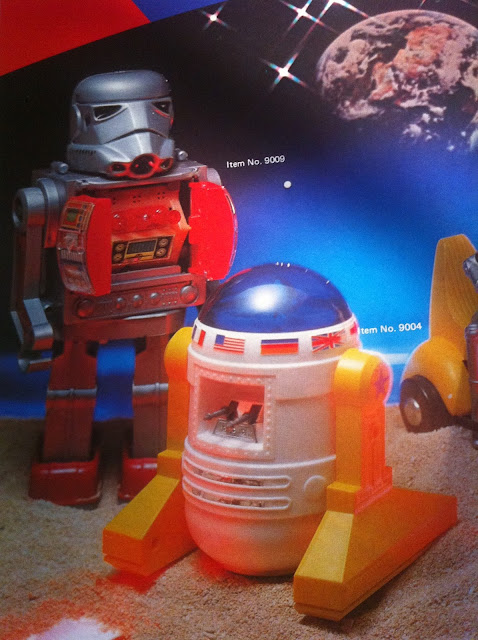 Following the "mix and mutate" principle (which I just made up), the cleaver toymaker combined the body of a knockoff Horikawa rotating robot with a brand new stormtrooperish head.  This toy was actually made (more below).

On the other hand, I have never seen any evidence that the funky R2-D2 ripoff was actually distributed.  Remember that the purpose of a trade show is to get people to buy your stuff and put it in a private labeled box on a shelf.  Some concepts don't make it that far and R2 appears to be a lost toy.  Too bad- the chest guns might have come in handy on the first Death Star.

Below, we have evidence of another lost toy.  I wish this one had been made.  The body is a mishmash of semi-bootleg design.  While the form emulates Japanese toys of the '60s, I can't pin down one in specific.  This combination in black with a stormtrooper head is pure genius! 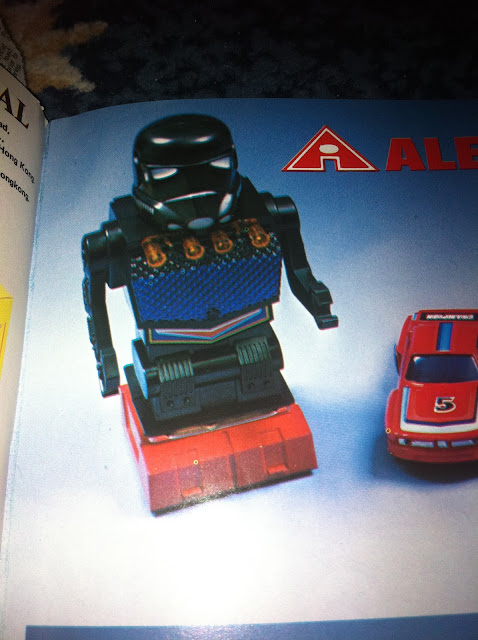 The Silver Warrior (left) and Super Astronaut (right) are among the favorite toys in my collection.  The mechanical systems are pretty poor and none can be expected to walk and rotate, but they look great. 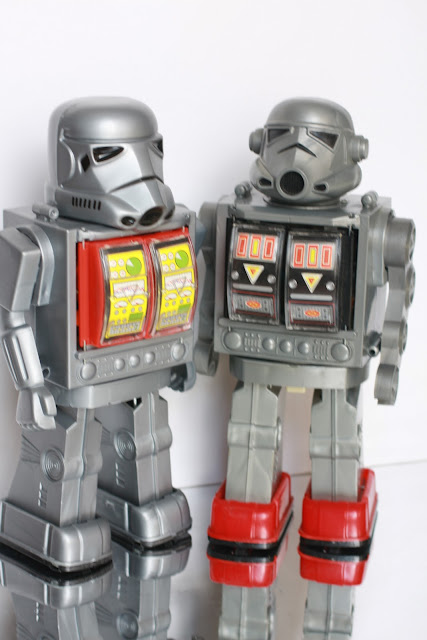 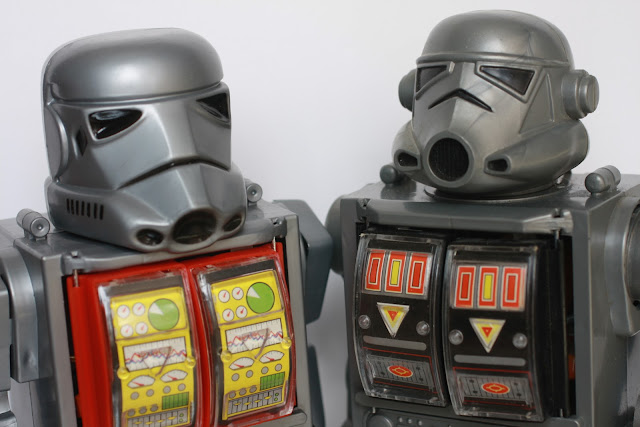 I've been fortunate enough to find these at a decent price.  Many of the Japanese tin and plastic robots are scarce and valuable.  Increasingly, collectors have turned their attention to the Taiwan and Hong Kong robots of the late '60s through early '80s.  Prices have gone up and Star Wars is always a strong draw.

If you interested in the wild world of robot toys, you can find more on my Fotki site at
http://public.fotki.com/coyotesareus/robot-toys/

I'll leave you with some insanely fun box art.  By the mid '70s, many toys had transitioned to window box or photographed front panel boxes.  These were packed in something resembling classic Japanese robot boxes with a creative twist.

"These aren't the droids we're looking for.  Move along!"

Update, March, 2011:  Thanks to the joys of traffic monitoring on the Blogger platform, I tracked back to a great blog featuring other variations on this Star Wars rip-off theme.  Go here to see the ultra-cool gloss black variation of the Silver Warrior:
http://strangestarwars.blogspot.com/2011/04/galaxy-warrior-robot-toy.html