Like a Candle in the Windy City: Marilyn Hits the Road

Once again, insomnia and a love of street photography got me out of my hotel late last Monday evening.  I tend to wander aimlessly with a camera in hand.  Chicago is a great people watching town and there is always something interesting going on.  On this particular evening, that something was the sculpture Forever Marilyn being taken apart and readied for shipment to warmer climes.

But first, I need to provide a defense of tastelessness.  I like to think of the camera as a neutral party.  It will always seek drama and interesting light.  A misty night in Chicago with the Wrigley Building bathed in floodlights provides more drama than a poor camera can tolerate.  The view from the other direction was comparatively boring.

You were warned about the tacky/tasteless camera angles.  Turn back before it is too late!

The specter of a 26' Marylin looming over Pioneer Court was controversial to say the least.  It wasn't around long enough to become an object of adoration.  It did draw a number of protests and attention from the teeming masses of tourists.  The Chicago Sun-Times produced a celebratory editorial entitled "Goodbye and Good Riddance, Norma Jean."

This statue represents a titillating and iconic scene from the 1955 movie The Seven Year Itch.  Today we would find much worse on network TV.  It's the scale and placement that draws attention.

As public art, it would be hard to argue that the entire installation wasn't a bit tasteless.  It was kitchy and over-the-top and probably would look more at home in Vegas.  Actually, Palm Springs is a sensible home.  It is warm, optimistic and smells vaguely of Hollywood.  According to local news reports, Marilyn Forever arrived in Palm Springs on May 14th.

Not surprisingly, the crew was very professional and everything was planned out ahead of time.  Seeing Marylin split in half triggered some science fiction memories.  Yeah, like the saucer separation of the Enterprise D!  (Just don't let Troi do the driving.) 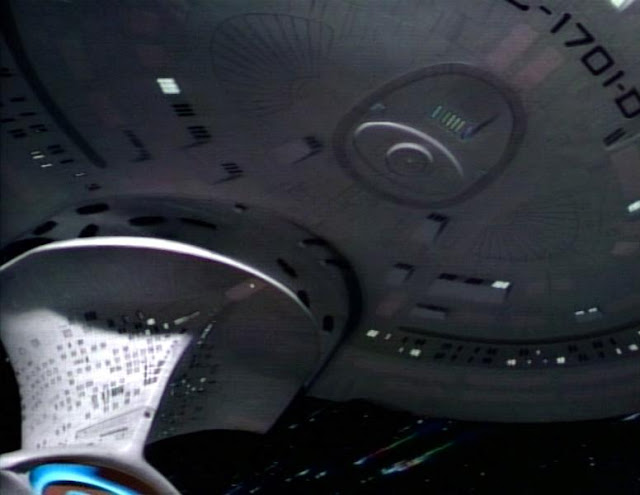 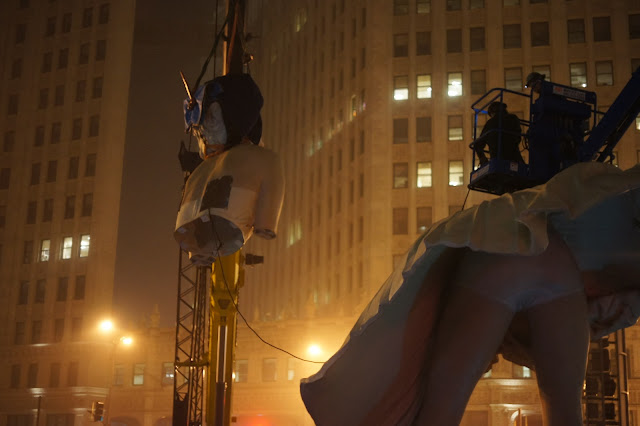 The Marilyn Separation also reminded me of another iconic Star Trek scene. 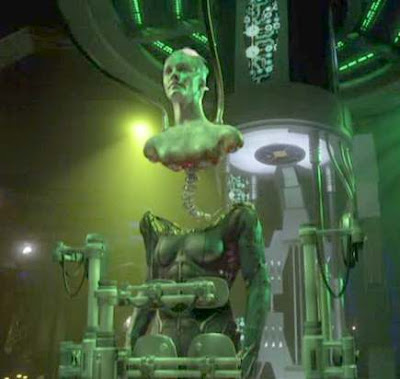 I didn't want to go too heavy on the photos or I would have added images of one of the crew climbing in and out of the lower section.  Tasteless is one thing; tasteless and disturbing is quite another. 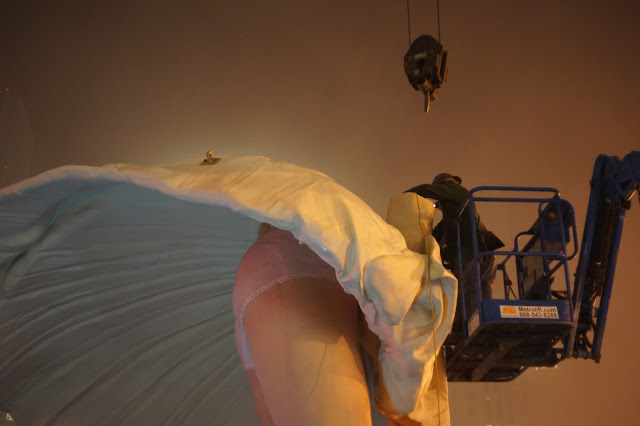 By now you might have surmised that more than one camera was involved.  For walking around at night, I fit the Sony NEX 3 with an Olympus PEN F 38mm f1.8.  I pressed the iPhone into service for wider angles.
I walked by Pioneer Court last Friday before heading to the airport.  It looks barren without Marilyn, but I'm sure Chicago has other mass installations in store.
Posted by Dwayne F. at 11:21 PM