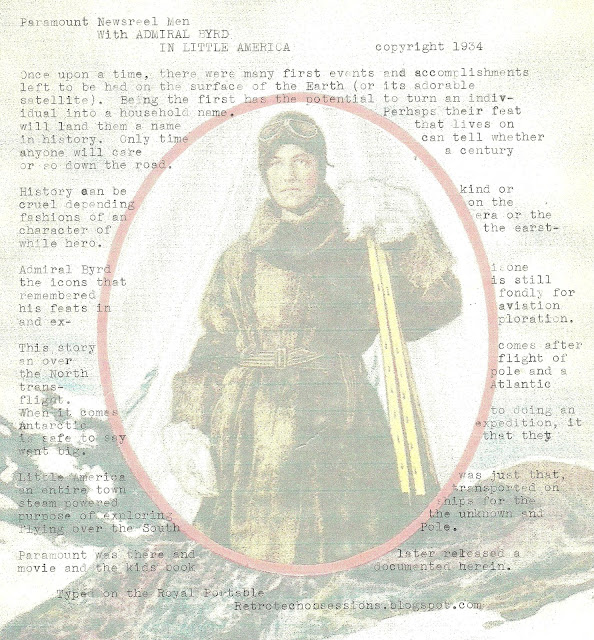 Richard Byrd was hardly the first to reach the South Pole.  Perhaps he is better remembered in the U.S. because this was an American expedition.  He had already garnered respect for his prior flights.

In addition to the gimmick of flying over the South Pole, the expedition did hard exploration. One memorable factoid from this book is that they discovered an entire mountain range.  I've become a bit spoiled by Google Earth.

Looking over this book brought back happy memories.  I grew up during the space race and aspired to becoming a pilot.  In elementary school, I even did a report on Admiral Byrd.  That was before drifting to 20:500 or so nearsightedness rained on that parade.

Now for a bit of rumination.  Admiral Byrd was one of my heroes and learning about how planes worked taught me a lot about technology.  Today, we take trips into space for granted.  The space shuttle program is grounded, but that has not prevented the continuous habitation of the International Space Station.  Many people are concerned that the lack of an American human space program with grand ambitions keeps us from becoming inspired.

This makes me think about my kids.  The technology oriented one, Gingercat, decided on her own that she wanted a radio license.  Her heroes include Nicola Tesla and Dean Kamen.  We keep up with NASA's robotic probe programs and sent poor Spirit electronic postcards before its last long Martian winter.  Like me, she tends to draw inspiration from past and present innovations and innovators.  She is OK with robotkind doing exploration on behalf of humankind.  However, I can't honestly say she is a typical girl.

Daughter number one is about to start high school in an innovative Animal Health program created in collaboration with K-State University.  She also loves science, but is not quite as obsessive about it as her sister.

Well, this blog post meandered a ways from the original subject matter.  But I can't help thinking about the future of innovation and the current state of science and technology education and inspiration.  I work for a manufacturing company engaged in helping building designers make buildings that don't fall apart in 20 years.  Intellectual capital and the ability to "make" are important priorities for me.

What do you think?  Where does your country stand in terms of innovation?  Do we have a hero deficit and does it matter?

As always, thanks for reading.