Last Stand at the Remington: Starring Godzilla and a Noiseless 8. Really.

WARNING:  This blog post contains disturbing images of potential historic typewriter abuse.  The viewer is advised that no typewriters were harmed in the making of this flight of fancy. 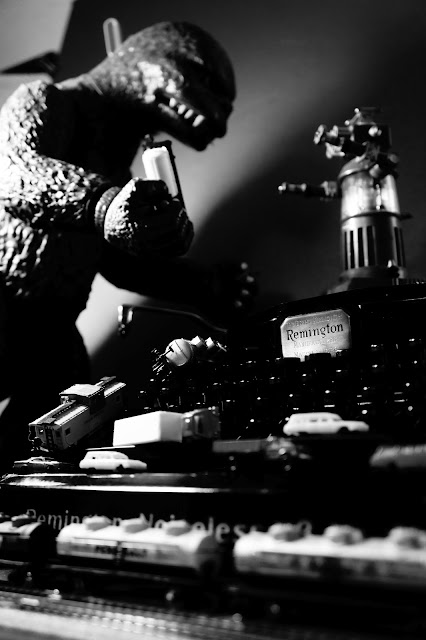 So, just when you thought this blog could not get any weirder, along comes a story featuring Godzilla, a robot and a very strange vinyl toy I can pretty much guarantee you have never seen.  Before I go any further, I must give credit where credit is due:  it was a Typospherian and blog follower, teeritz, who suggested that the Remington Noiseless 8 looked like a Deco skyscraper.  I just took that concept a step further.

OK, I took it a few steps further.

The story starts with a trail of destruction that did not get captured on a digital sensor.  Well, it was, but the photographer was crushed by falling debris.  The best documentation from the scene starts with a lone robot, Commander Zogg, making a valiant last stand at the Remington Building.

The National Guard tried; they really did.  If you are at all familiar with the depredations of Godzilla in Tokyo, you have an idea of how well that worked out.  Still, the government had one secret weapon in reserve. 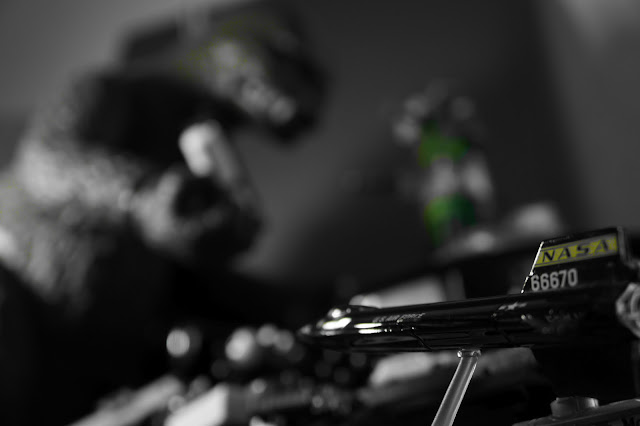 Pretty much any pilot worth their salt can tell you that we're all just one atomic breath weapon away from eternity.  Just like those poor Japanese pilots.  It was a nice plane.  Bummer.

Things were looking pretty grim for our hopeful hero.  A space robot can only take so much.  The radiation was getting intense and Godzilla was throwing everything he could get his scaly claws on. 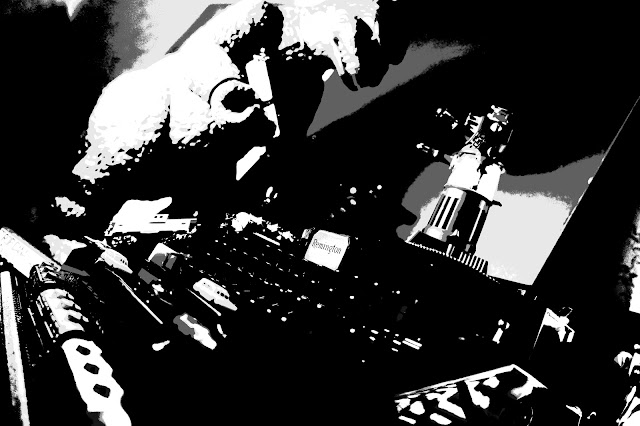 Commander Zogg withstood a barrage that would have brought the great kaiju of Japan to their knees.  The roar, while painful to his auditory sensors, was manageable.  He easily absorbed blast after blast of the atomic breath by rotating the frequency of his quantum resonance shielding.

People fleeing in terror stopped long enough to look over their shoulders at the tremendous confrontation.  At least one adorable boy in a private school uniform even dared to voice hope:

"It's Commander Zogg!  He will save us!"

But hope is a rare and tenuous commodity.  How quickly a situation can change.  And change it did when Godzilla unleashed his most powerful weapon:  the full body nuclear pulse.  Suddenly, it appeared that Zogg, the bravest robot of his time, was doomed. 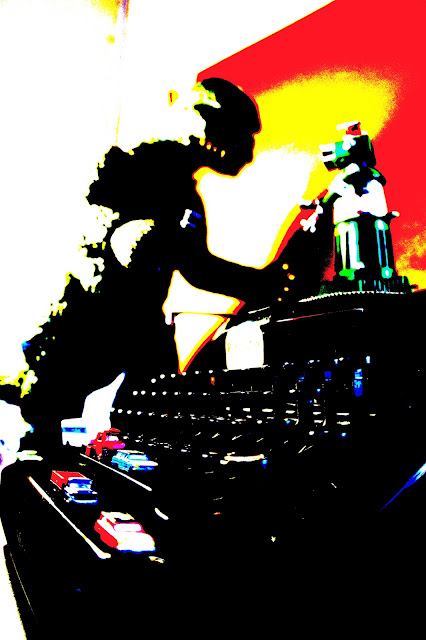 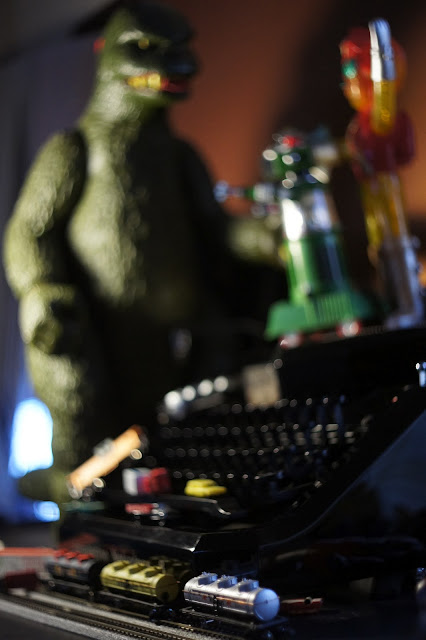 Godzilla isn't known for restraint or logic.  While quasi-intelligent, he is primarily a creature of passion and instinct.  Few weapons are known to injure a monster of his stature.  However, he does remember pain.  He also remembers the Oxygen Destroyer all too well.  Having been skeletonized  once before, he eyed Astro Mu's canon with trepidation. 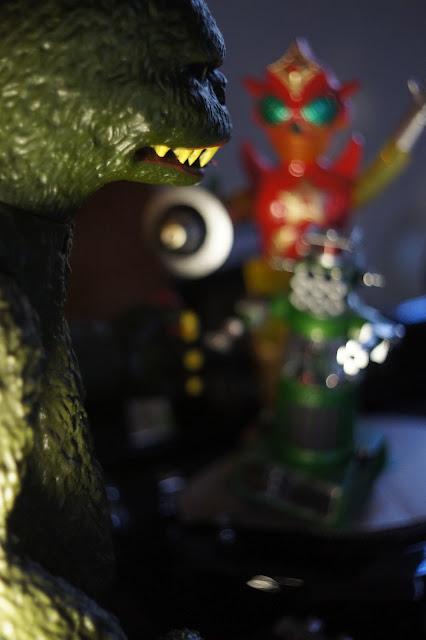 With a grudging snarl of admiration, the Tyrant Lizard broke off his assault and trudged through the debris of New York back to the inky depths from whence he came. 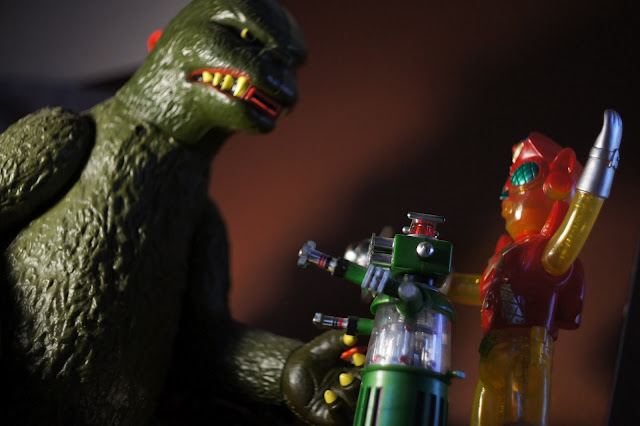 New York, or what was left of it, was safe once again.  Godzilla may return, but he will certainly face new, determined defenders.

With the largest budget ever in the history of Vintagetechobsessions Productions, the crew created an unparallelled  alternative reality for our viewer's pleasure.

Typewriter safety is a priority at the studio.  In order to assure humane treatment, a representative from the Typewriter Protection Society (TPS) was on hand to witness filming.  An after action report was filed in accordance with the Typewriter Safety Act of 2004. 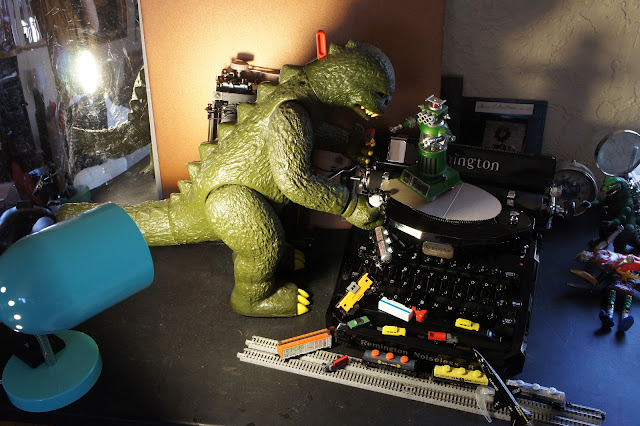 * Yes, it takes a true Nerd to know the difference.

Ultraman was originally cast as one of the heroes.  A product of the studio system, he looked heroically heroic.  However, his conventional good looks did not set well with the the Executive Producer's vision. 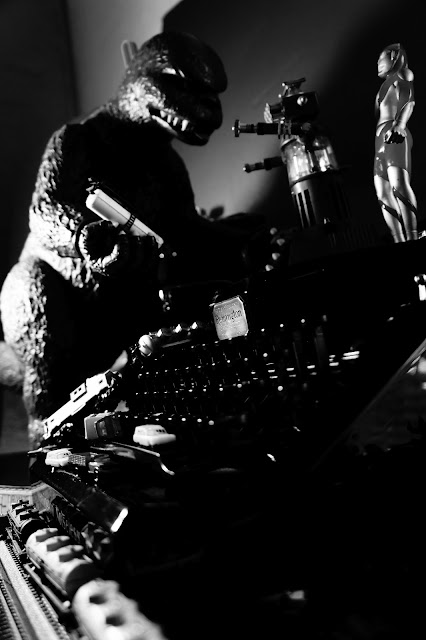 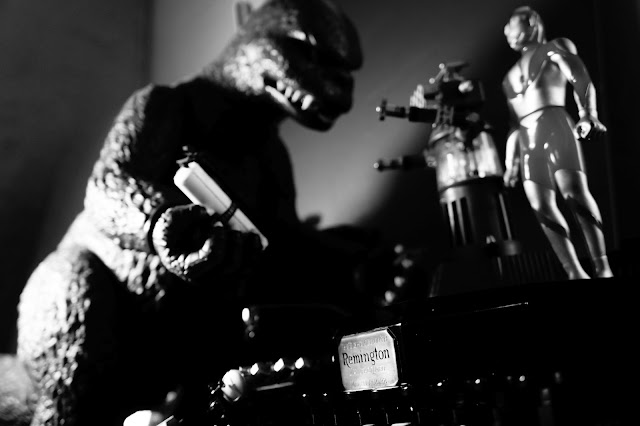 All photos and text are copyrighted by Vintagetechobessions in association with Vintagetechobsessions Productions.  Unauthorized reproduction may result in strange toys appearing in your bedroom late at night. Yeah, they are watching...

My Remington Noiseless 8 is reviewed in full and loving detail elsewhere on this blog.  As always, thanks for reading!