Well, that was a bold teaser of a headline.  So why is this first photo so shrouded in mystery?

Simple.  My wife reminded me of the basic "Jaws" principle:  you don't bring out the shark until the third reel.  Buckle up.  This post is on a special machine and is going to be longer than the norm.

In all honesty, I started writing this post in January.  But here we are in February just in time to celebrate the International Typewriter Appreciation Month (ITAM).  And while Remington didn't invent typewriting, they successfully took it to the mass market.  Celebrating a Remington milestone seems a good way to mark ITAM.  I have been enjoying the Typosphere ITAM posts including the latest school typing project.  Good work, everyone! 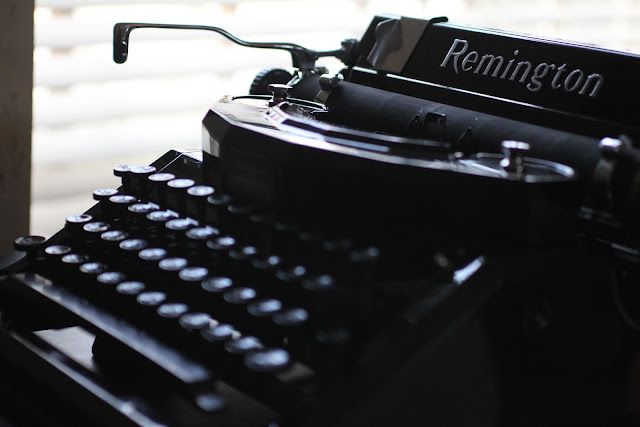 To start with, I know much more about this machine than I otherwise could have thanks to the efforts of The Classic Typewriter Page and Machines of Loving Grace.
http://site.xavier.edu/polt/typewriters/remingtonnoiseless8.html
http://www.machinesoflovinggrace.com/rems.htm
For instance, without copies of manuals and overview diagrams, I could not have figured out how to unlock the carriage.  On top of that, I would not have known of the existence of this machine had it not been for these websites.  Thanks for empowering junkies! 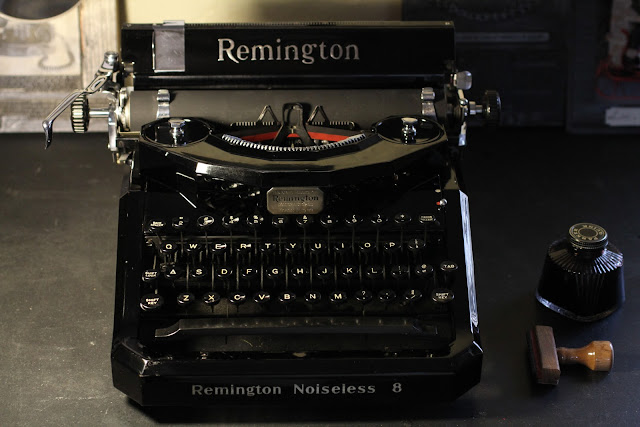 The Remington Noiseless 8 is a variation on a theme.  Its companion model, the Noiseless 7, features the same mechanical system in a low slung form factor better suited to portability.  This machine is more about the experience of a larger desktop form and a thorough infusion of Art Deco design.

Functionally, the Noiseless machines were optimized to deliver a glancing blow to the paper and platen minus the characteristic "clack" that normally accompanies this action.  I've been on the lookout for the right Noiseless 7 or 8 for months in an effort to cope with a schedule variance with my family unit.  I am an insomniac night owl who stays up far later than they.  This generally means no typecasting late at night. 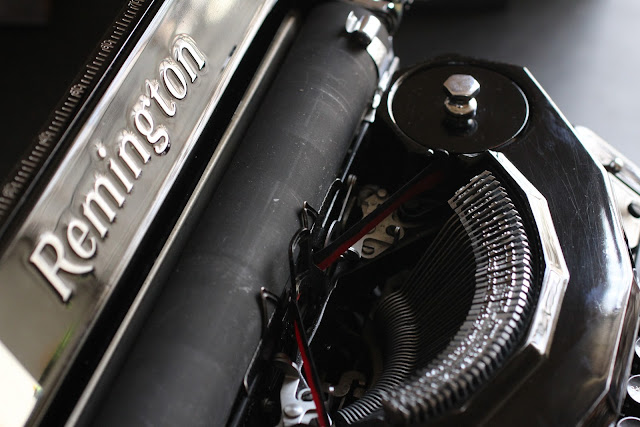 Let's look at some design details.  The typebar mechanism is articulated and includes swinging counterweights which control the final acceleration to the platen.  The end result is freakishly quiet.  I can hear the weights swinging around inside, but can barely hear ink being put down for posterity.

Pulling the hood is a different experience.  One interesting detail is that the Noiseless 8 incorporates cast aluminum in this part of the machine.  That is good both for the complex shape and the sound deadening qualities of the material.  There isn't much to see, as much of the typebar assembly is hidden from view.


The primary steel shell and back cover feature robust sound deadening inside that would not look out of place in the door panels of a luxury car.  Instead of more typical felt, each large panel has bars glued into place that reduce resonance sound attenuation.  The sheet metal stops acting like a speaker as sound is tamped out and dies.

The patent drawing helps us get a grasp on the mechanism.  It is an intricate design that appears to have more moving parts than the average typewriter.  Richard Polt reports that the original price was $105.  I plugged that into an inflation calculator and came up with a 2012 equivalent of just over $1,800.  These machines were serious investments. 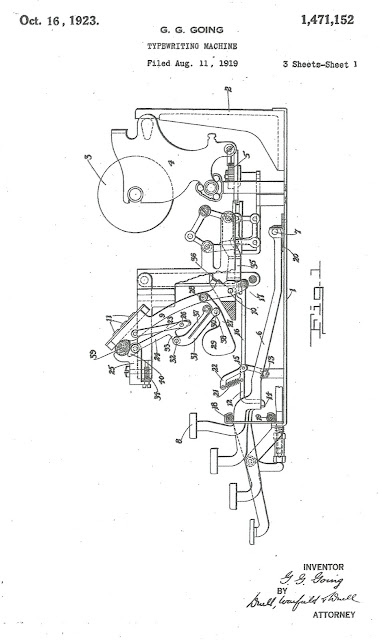 This would not be my blog without an overload of macro photography.  The aesthetic details on this typewriter are really interesting.  The finish on every part is superb with thick chrome and outstanding machining.  The black paint is about as close to pure black as I have seen.  It sucks up light like a stealth fighter.  There is a downside in that every speck of dust shows.

As for the plastic keys, I went to an expert for advice.  Richard Polt states that the Noiseless 7 was known to have utilized plastic keys starting in 1931.  In all likelihood, this 1933 machine came equipped with the keys as shown.  Especially given its history, the plastic keys shall remain unmolested no matter how sexy the chrome and glass keys are!

Second Reel
Welcome to the second reel.  At this point we arrive at a bit of a mystery regarding provenance and history.

You may find this hard to believe, but I bought this machine on ebay.  Really.  I'm still surprised.  The bidding wasn't even that heated because the seller created a somewhat odd description.  As it turns out, I outbid one of the Godfathers of typewriter collecting.  I'll let him comment on the subject if he so chooses.

So here is the problem:  I cannot definitively state its provenance.  However, I can present the available dots that provide a fairly solid, if not entirely provable, back story.

The seller is in New York City and stated that the presentation plaque (mounted in front of the spacebar) had been removed prior to sale and showed that the recipient was the YMCA Typing Club.  The case contained a couple of clues as to where it might have lived for these many years.

Item 1:   A Remington publication entitled A Brief History of the Typewriter was included in the case.  It talks of one potential New York connection; that being the YMCA Ballard School program that pioneered typing instruction.  This turned out to be a frustrating connection as I could find almost no information on the Ballard School, or even the history of the New York YMCA, online. 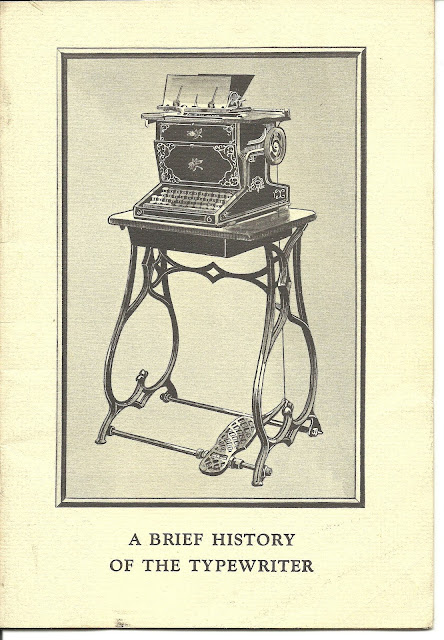 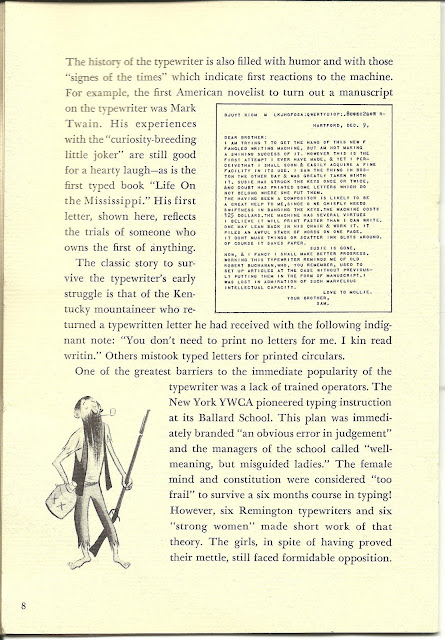 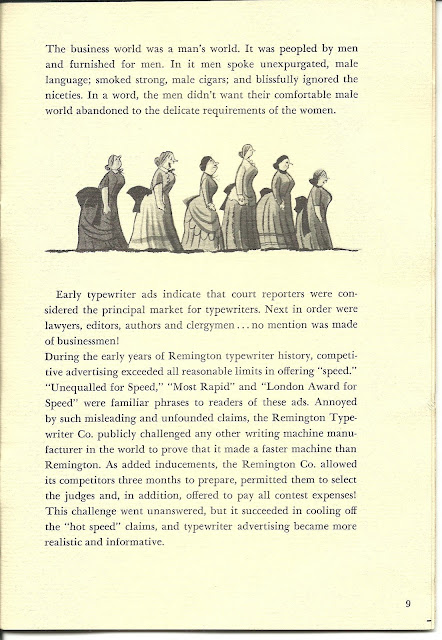 Fortunately, I have a random collection of ephemera including a Good Housekeeping magazine from 1939 (highly recommended - the ads are hilarious!).  It included an advertising section for summer camps that established the location of the Ballard School of the Y.M.C.A. as being at 610 Lexington Avenue in New York City.

Item 2:  Inside the case, there was a decal for plaza typewriter Exchange Co. at 120 East 59th St. in New York City.

An online map search verified that the two locations are six short blocks apart. Street view shows a vacant lot at 610 Lexington Ave.  An additional search turned up the sorry saga of the Shangri-La Hotel high rise that was to be built on that spot.  That story begins in 2005 with the purchase of the YMCA property and demolition in 2007-2008.  The project failed due to financing issues caused by the collapse of Lehman Brothers.  Photos of the original building and the smoking crater are at
http://wirednewyork.com/forum/showthread.php?t=5616&page=14

Side note:  Honestly, nerd-o-riffic research was so limited in the era before the World Wide Web.  On the other hand, car engines were less complicated and I could actually rebuild them back then.  Just sayin'.

Interestingly enough, the building had some restoration work prior to it going on the block.  I hope that my employer's masonry cleaners were used in the process.

Again, I cannot without a doubt state where this typewriter came from.  However, if I were in the Remington marketing department, it would seem advantageous for a company milestone to be housed at a location significant to the company history.  The Ballard School site is conveniently close to a typewriter retailer of record and it would have had reason to be liquidated in the last five years.

So there are the dots.  How comfortable do you Typosphereans feel with these connections?

And now we have finally arrived at the third reel and can take a closer look at our mysterious friend.  I promised proof of the milestone eight millionth typewriter status, and proof you shall have. 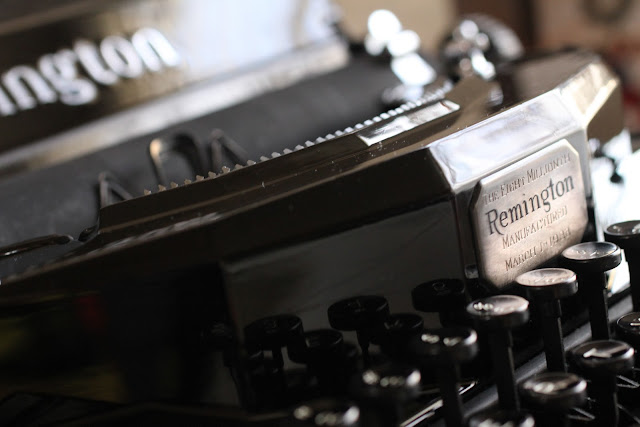 You will just have to pretend that this is as dramatic as a Great White shark jumping onto a boat. For once, I don't need to depend on the Typewriter Serial Number Database to know when this machine was made.

This is the one vintage machine I own that has an absolutely clear birth date.  We'll add it to the family birthday celebration list.  An art deco layer cake could be a great project for the girls!

And now for the serial number...

I uploaded the entire photo set, outtakes included, to my Fotki site at
http://public.fotki.com/coyotesareus/remington-noiseless/

A Brief Word on Manufacturing History

I happened across a record of the Remington-Noiseless manufacturing facility in Middletown, Connecticut where the Noiseless machines were built.  This has more information than you would possibly want to know. http://www.middletownplanning.com/documents/RemingtonRand_Middletown.pdf

Presumably, this was the site for manufacturing portables and office machines.  This plant originally produced bicycles and later horseless carriages.  The Noiseless Typewriter Company was organized in 1909 and began production at this site in November of that year.  Production continued here after the formation of the Remington-Noiseless Typewriter Corporation in 1922.  The facility was in continuous operation until 1937 when it was closed for several years after the result of labor unrest.

This latter detail is interesting in the context of labor issues involved in the production of modern communications technology.  Recently, Apple has received criticism for outsourcing production overseas and utilizing a manufacturing partner with a mixed record of employment practices.  There have been fatalities and employees are known to work double shifts to get our wonderful devices out the door.

Labor unrest and management reactions took a different form in the early 1900s.  This Remington factory reportedly used inexpensive immigrant labor.  In 1936, 1,200 workers went on strike.  Much like the famed Ford factory labor dispute, this action triggered a wave of violence that ultimately resulted in the National Guard being called in to restore order.  James Rand was indicted under the Byrnes Act and was acquitted in 1937.

This is one of those deals where I was not particularly pleased to learn about history.  Does my machine have blood on its keys?  The truth is, most of us would be surprised about the labor and materials that go into the tools of our industrial culture.  After thinking this through, I came to the following conclusion:  Regardless of the human sweat and toil that went into making this Noiseless typewriter, the fact that it has been preserved and will be well used is a manifestation of respect for the people who made it. 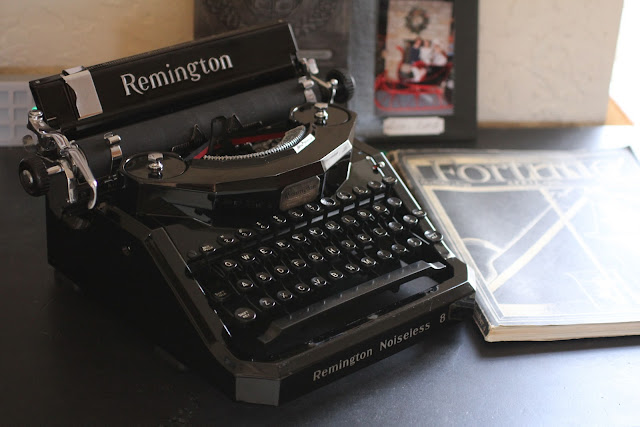 I feel very fortunate to have this typewriter in my possession.  It is both functional and unique.  I recently blogged on a unique chrome and faux wood Royal Portable.  I have some interesting and hard to find typefaces in my stable as well.  So, what are the chances of topping this find?  Slim to none.  And that is OK.  The acquisition phase inevitably winds down.

I can now focus on getting the rhythm of this machine down as it will be my night typing companion for years to come.  Tips and tricks on lubing and tuning this beast are, as always, appreciated.

Thanks for reading, and a Happy ITAM to all!