For anyone that has been following this blog, it is no secret that I have a serious love of anything related to space exploration.  It's my birthday and I am going to totally date myself by posting National Geographic images from the month I was born.  I can't think about my birthday without thinking of growing up during the space race.

The excitement of space travel and technology development was the flip side to growing up with the Vietnam War, the Cold War, duck and cover, and its close cousin Mutually Assured Destruction.  I grew up in an era where all of this was shiny and new.  Everything smelled like the future.  Well, except for cars before emission controls. 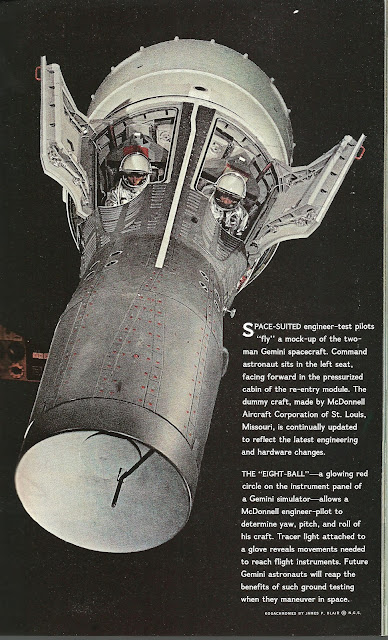 It's funny that I still think of us getting to the moon in terms of "we" and "us".  Certainly, there is some national pride and I would not have wanted the Soviets to get there first.  But I tend to think of actually getting there as an accomplishment for our species.

As much appeal as I find in human space travel, I am still excited by our collective activities in space exploration.  Four years into the Great Recession, it is hard to comprehend the amount of money it would take to lift people and all the stuff they would require to Mars. From my perspective, we need some really good targets before we take the next steps.

We are doing some incredibly good science between our robotic and remote sensing servants. As of March 19, 2012, we have collectively cataloged 762 extrasolar planets including one water world.  Just this week, we learned that Mercury is a really strange place. NASA Messenger Findings

Although our family mourned the loss of the Mars rover Spirit, Opportunity is beginning its ninth year of its three month mission.  Its much larger cousin, Curiosity, is in route to Mars loaded with a comprehensive laboratory tools.  Curiosity won't be dependent on solar power.  We'll see what lessons have been learned on reliability in design.

Although the NASA shuttle program is no more, the International Space Station has been continuously inhabited for over 12 years and zips by overhead every 90 minutes or so.  The U.S. crew members are licensed amateur radio operators.  Beyond having access to high powered transmitters for remote control quadrotors, talking with the ISS crew is the coolest thing I can do with my new FCC Technician license.

Granted, my kids have a space cheerleader at home and friends bound to be future software, computer and robotics engineers.  Although human space flight is a big deal for them, they are equally excited about everything else going on in space research.  At some point we'll probably try out the crowd sourced SETI Live program. http://www.setilive.org/

For me, space is all about inspiration.  I'm thankful for the pioneering work that has gotten us this far.  I'm also excited for the future of space exploration.  When we decide to go, it will no doubt be to someplace incredibly interesting.  Maybe one of our emissaries will get to say hi to Spirit in person.

More space stuff:
Amazing kid space ephemera:   http://dreamsofspace.blogspot.com/
If you like toy LEMs, you will love these great examples:
http://projectswordtoys.blogspot.com/2012/03/few-good-lems.html