What was your last commercial aviation experience like? Was it in an Airtran plane that looked like it came out of a desert storage yard? That's what replaced the Midwest Express Kansas City to Washington National run. You know, the one that used to have hot chocolate chip cookies.

The one good thing I can say about air travel is that it has been democratized. Many people can afford a quick trip from Point A to Point B. Sure, the planes are cramped cattle cars; this is especially true for tall and large travelers. Can you believe that air travel used to be romantic? 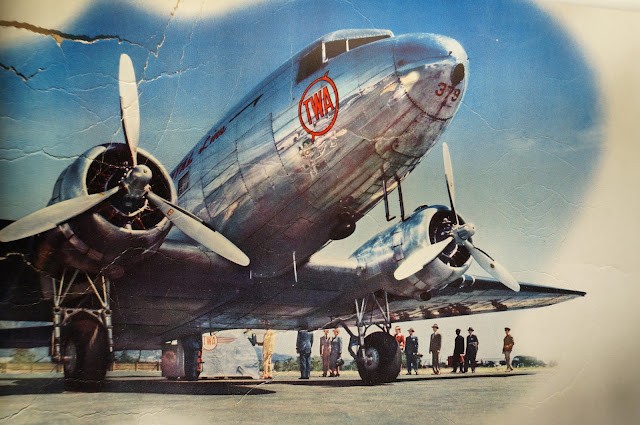 Once upon a time, taking an airplane was an exotic experience and the DC-3 was the best thing in in the air. I came across a wonderful bit of ephemera that helps drive this home: a 1944 TWA promotional calendar. 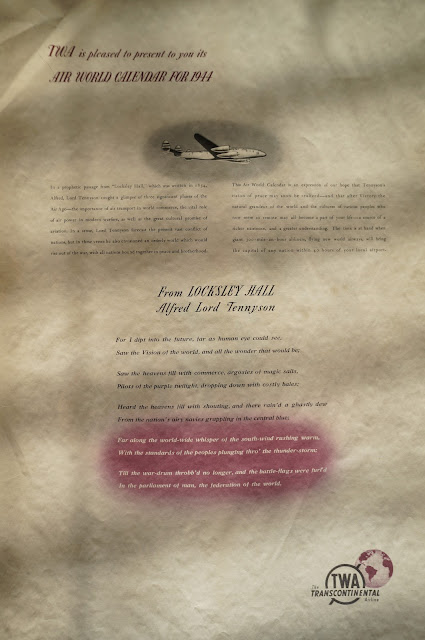 Back in the glory days of unlimited, virgin pulpwood, promotional calendars were serious business for TWA. This is over two feet high. 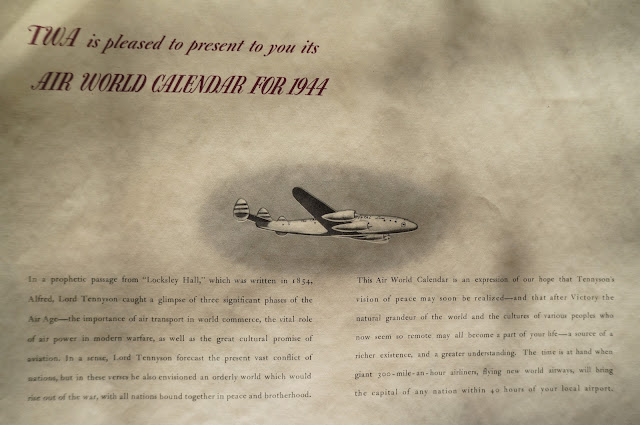 1944 would have been a strange time for recreational and business aviation. World War II was still in full swing and the geopolitical map was being drawn and redrawn at a terrible and deadly pace. In the context of the war, TWA's World Air Map is interesting, indeed. 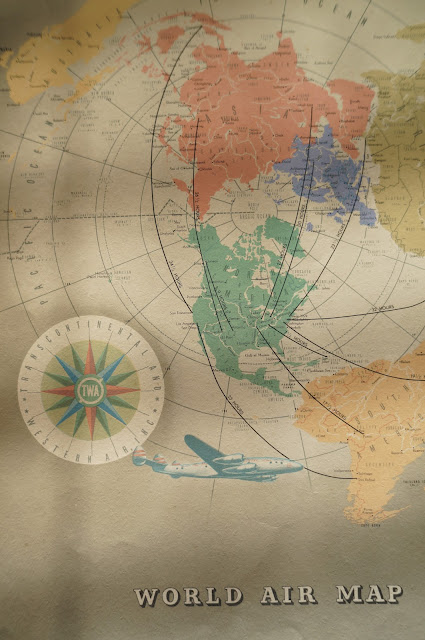 The workhorse for TWA in 1944 was the relatively new Douglas DC-3. With a quiet and pressurized cabin and flight attendants that catered to passenger's whims, it represented the best in travel experiences.


Oh, and the interesting locales you could fly to! Back in the day, these were still exotic and foreign places. There was no Twitter delivering instant news of what was happening on the ground or massive data cloud of photos and blogs about every statue and back alley. Heck, I remember back in the '80s a trip to Chicago was pretty special. Now it is a skip and a jump on a Southwest plane - that is provided they don't combine two flights to optimize profits. You didn't really need to make it to your destination in time for a meeting, did you? Mooo!!!! 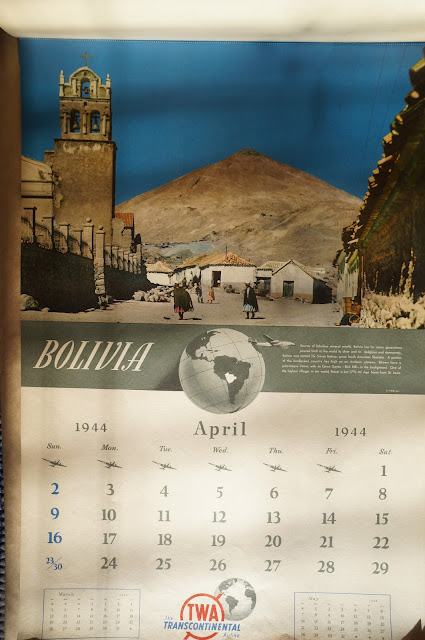 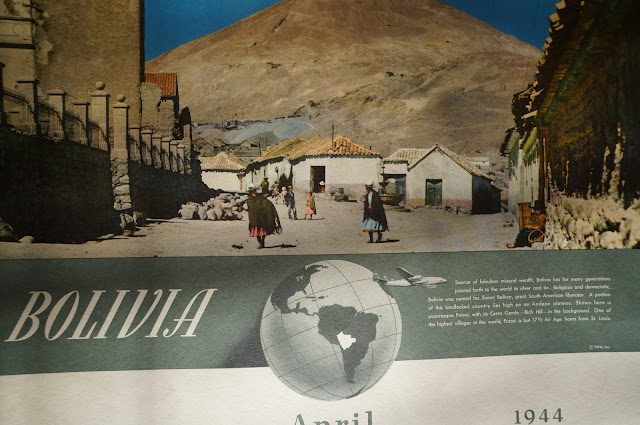 And China? That was the place with the big wall and temples featured in the dead tree version of the National Geographic. By the way, reading an issue from the 1940s is a real treat. If kept from light and moisture, old National Geographic magazines are remarkably well preserved and full of graphic goodness. 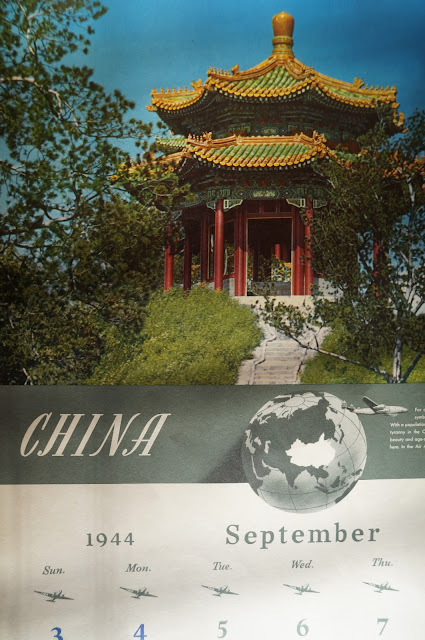 Malaysia? You might as well have been flying to Shagri-La! 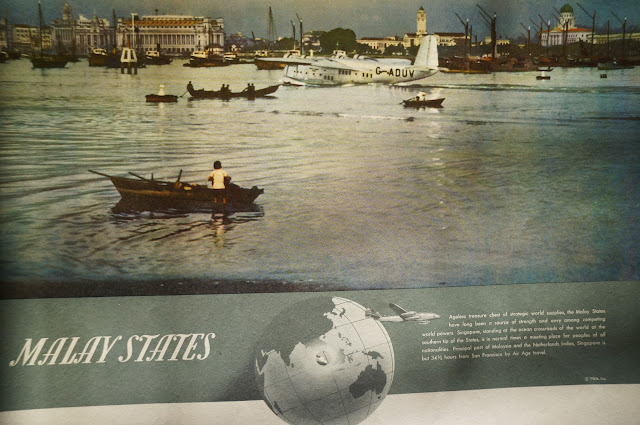 Of course, TWA could whisk you across the United States in style. 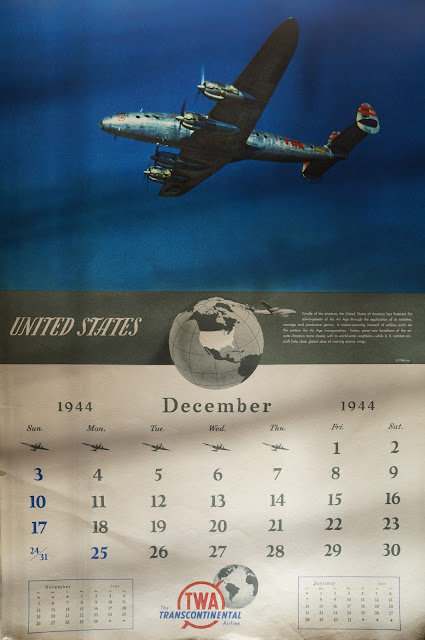 With so many routes to choose from...

And lest you forget there is a war going on, they will remind you of the other way DC-3s are used to move people. 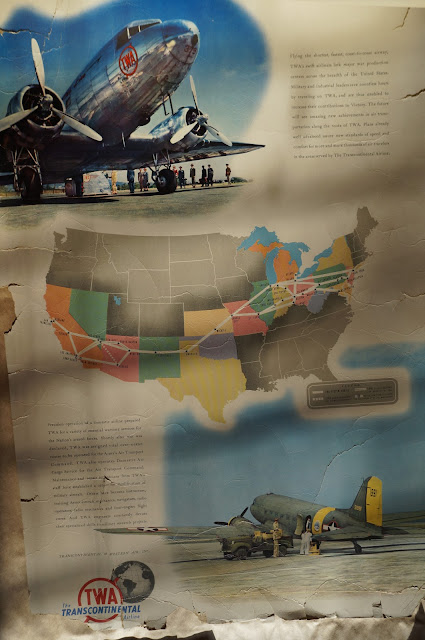 Here is a little bit of a history lesson on cross-country travel in the prewar era:


"TWA was the third airline to put the new DST in service. They accepted the first eight in April, 1937. On June 1, 1937, they put their "Super Sky liner Sleeper" DSTs outfitted with eight berths up front and nine divan chairs in the rear, in service between New York and Los Angeles. TWA called this flight the "Sun Racer," although it never quite won the race. It chased the sun across the country, leaving New York at 8:30 a.m., and arriving in Los Angeles at 11:30 p.m. the same day."  Source:http://www.dc3history.org/dc3.htm 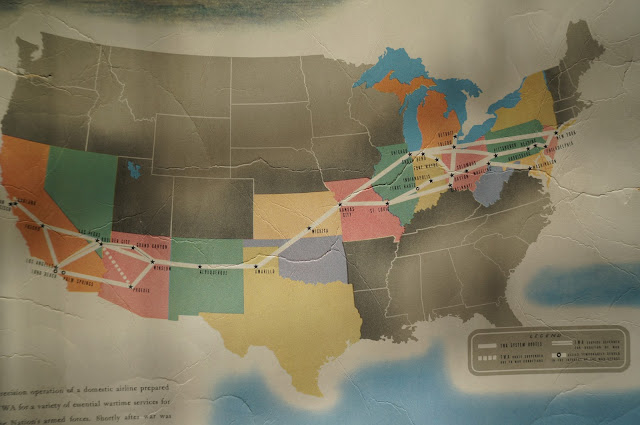 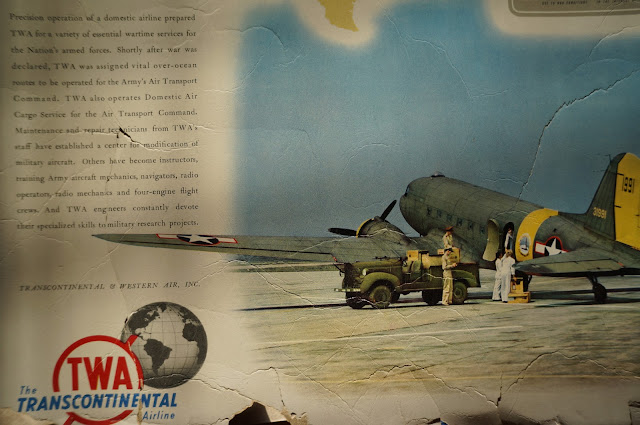 I saved the best part for last.  Geopolitics is a delicate subject with many alliances shifting over time.  My favorite pages from this calendar represent countries we were once friendly with.  Iran, of course, is our sworn enemy today, but it was a tourist destination in 1944. 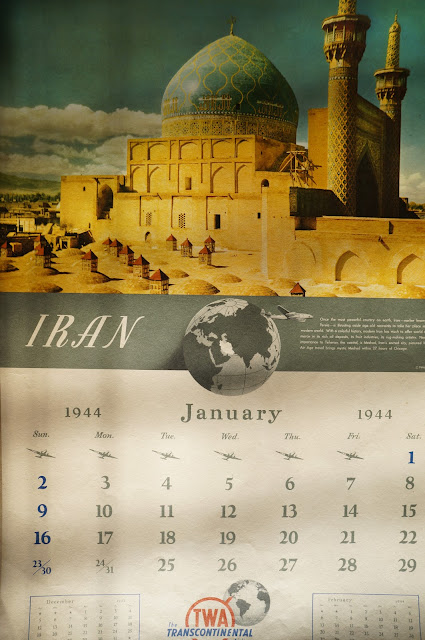 And then there is our on again, off again friend/frenemy and rival/mortal enemy, the Soviet Union.  It would seem to be a stressful place to visit in the midst of WWII.  But it is a large country and the fighting was most likely far away.  Just a few years later, the Cold War began in earnest. 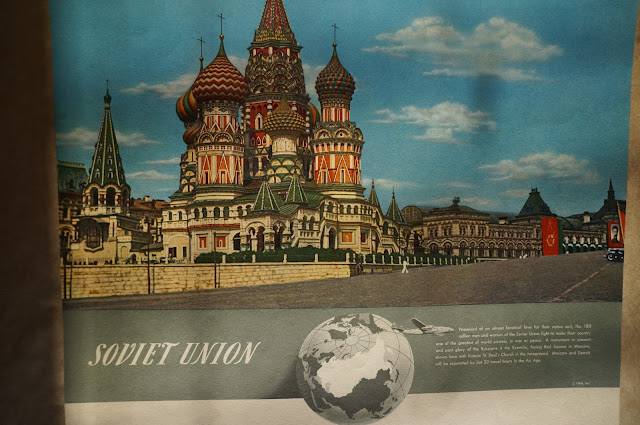 I have been coveting a framed page advertising travel to the Soviet Union from a 1948 TWA calendar for over a year.  It appears this antique mall seller is resistant to discounts.  I was overjoyed to find an entire calendar elsewhere for next to nothing.  I hate to break it up, but I very much want these last pages framed and up on my office walls.

Thanks for joining me on this little voyage. Rest assured, this blog has not been abandoned. This article is proof that I can create multiple drafts and let them marinate for months on end before I decide to grab one and complete it.

More random copyright things: All of the words and images, other than those sourced elsewhere, are mine. Use with attribution, but not for commercial purposes, you must. Please share the Blogger love. Use the handy Google+ sharing feature at the top of the frame. You can find me and a whole bunch of really awesome photo communities over in that ghost town of a Facebook competitor.